With three associates who are all graduates of Landscape Architecture, APS agency is a landscape, architecture, public space and urban planning agency whose team is nationally renowned for several years having won top prizes in the French landscape awards (Victoires d’Or du Paysage 2014 & 2016) for the conception and the realization of many urban and landscape projects, carried out mainly in the southern region of France, from the Alps to the shores of the Mediterranean.

Its interdisciplinary approach reconcile landscaping, urban planning, territorial development and ecology. Because of its landscapist-urbanist culture, and with its experience and laurels that shape its know-how, it now has a wide range of skills and a great capacity for adaptation that enables the agency to handle diverse urban and landscape issues.
A keen and experienced team has a grounded method of working and multidisciplinary knowledge through projects of various themes and scales: the great landscape, the city and its territory, public space architecture, parks and urban gardens, infrastructures, etc.

A contextual and ecological project approach

The APS agency has a persuading contextual and ecological approach. Each project is unique and «original» and seeks to stimulate and activate the vital forces of the state of the place in which it is a part of in order to reveal the «genius of the place» to cultivate its identity and its character.

Through the public spaces it designs, APS seeks to weave links between sites and the great landscape, between past and future uses, and to bring together tradition and modernity. Thus, the APS agency develops living public spaces, in line with their history, revealing an affirmed identity, and integrated into their wider territory. For the agency, the constraints of the site (topography, flood, drought …) are perceived as engines of design and vectors of the identity of the premises making it possible to rethink ways to live and experience the city.

Faced with rapidly changing climates, societies and their needs, urban development based on geography, morphology, history and heritage, uses and the «organic» functioning of territories is a meaningful way for towns and cities of tomorrow in search of identity and sustainability. It is at the crossroads of the context and the new urban needs that a new «adapted» and intelligent urbanity is built, resulting from a fine understanding from all scales of the project territory.

Considering urban identity as an intrinsic but fragile wealth and an inalienable common good, impacting both the quality of lif and the economic and tourist influence of cities, is at the heart of the concerns of APS. Since its creation, the agency has worked to establish a perfect continuity from the conceptual project to its technical and physical realization (site monitoring). The landscaping project for the exterior Garden of Migration of Fort Saint-Jean in Marseille is an example, where the flooring materials, choice of plants, and the details of the ironwork magnify the identity of the exceptional Fort Saint-Jean site, showcasing new uses and its relation to horizons.

Devil’s bridge which is at the heart of the Big Site is full of history and culture. It is a place of age-old landscapes listed in the world heritage by UNESCO as part of Saint Jacques de Compostelle’s road.

Our inspiration for this architectural and landscaping creation comes from all these observations:

-the footbridge is technologically reliable, refined, organic and unpretentious.
-The Site’s Building plays on the idea of « disappearance », withdrawal and dissolution.
– The landscape project is in line with an approach that is respectful of the site’s identity.

It is the opportunity for enabling a global and coherent project to meet the scale of the site’s huge beauty and its emblematic characteristics. 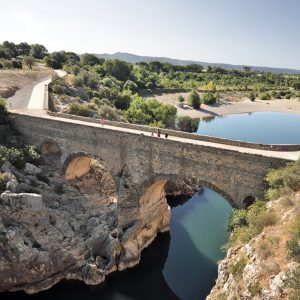 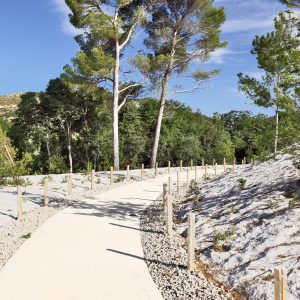 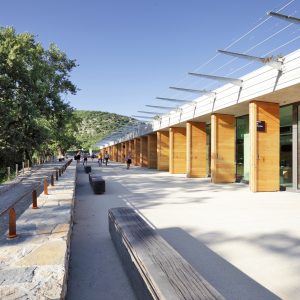 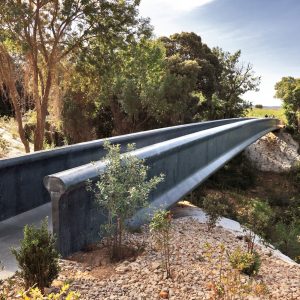 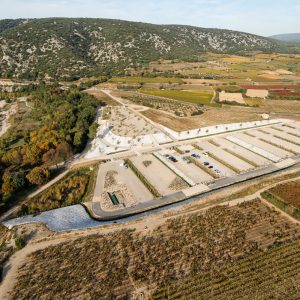 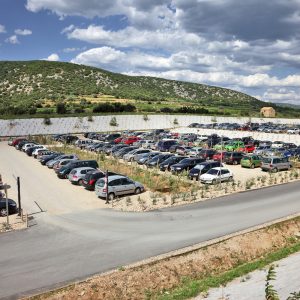 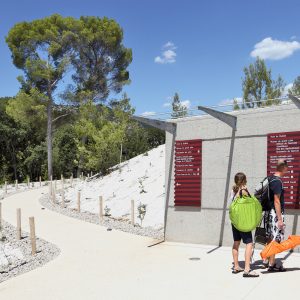 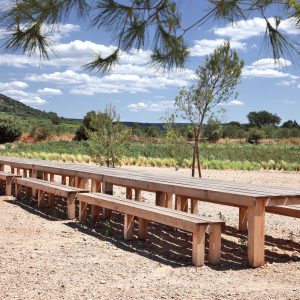 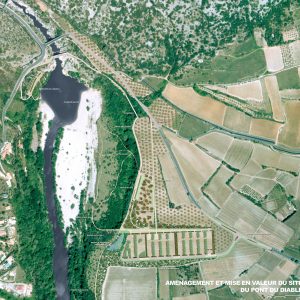 On the concrete slab without memory of the esplanade, the contextual and sensitive approach is conducive to rebuilding a story thanks to rhetoric appropriate to the new reconstituted universes of the project. The evocative power of the project thus refers to situations experienced or places known by fans or enthusiasts of the mountain environment summer or winter – city dwellers, tourists or alpine skiers.

In the North, the triangle of the vegetable esplanade. The flat situation and the vocabulary of development refer to the geography of “limestone plateau” like the fabulous lapiaz of Parmelan.

On the southern edge of the Upper slab, the large central rectangle of the urban terrace becomes the “beating heart” of the project. Its perched position visually open to the horizons, on the Semnoz mountain and on the Bornes massif, refers to the ambiances (or atmosphere) of the terraces of high altitude restaurants so popular with skiers on sunny days.

The third space establishes the link between a high and a low slab. It is a garden of roses, which leans on the box of the carpark to better erase it. The urban inclusion of the garden in the slope is not without reminding the geographical situation of the “slope” characteristic of the mountain relief. 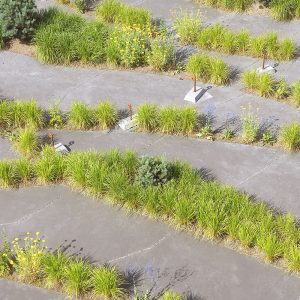 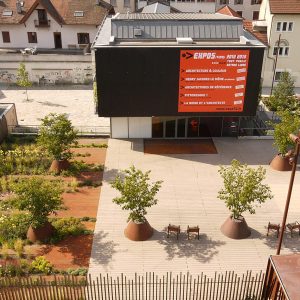 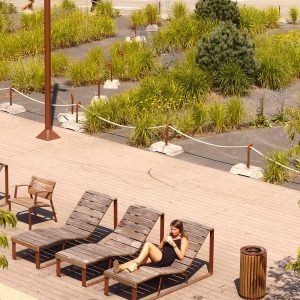 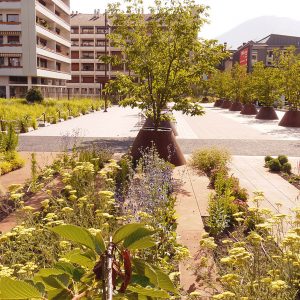 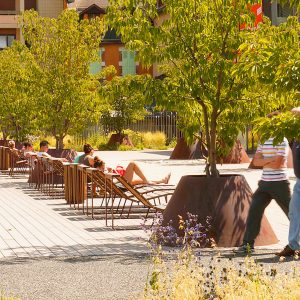 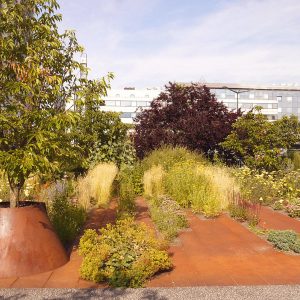 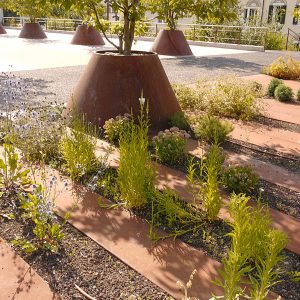 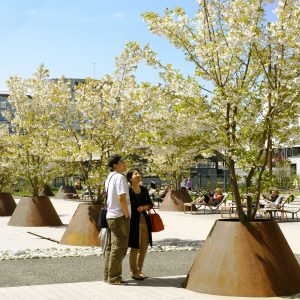 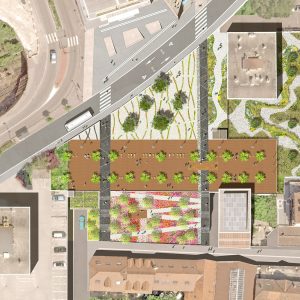 The Garden of Migrations

Overlooking the port of Marseille, place of arrival and departure of men and plants, the garden promenade of Fort Saint-Jean extends the Museum of Civilizations of Europe and the Mediterranean (MUCEM) and links Marseille to its history. The different areas of the Fort form the Garden of Migrations which through a succession of sixteen scenes evokes the mixing of cultures around the Mediterranean and the plants that accompany them. 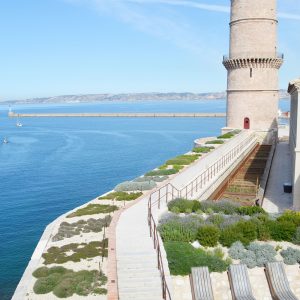 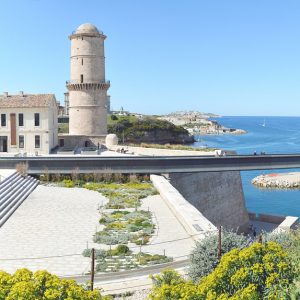 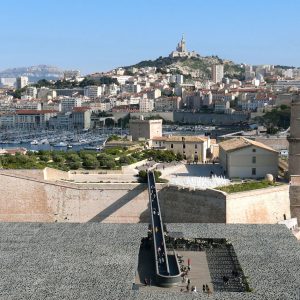 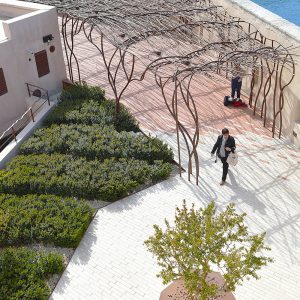 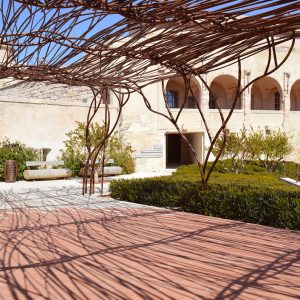 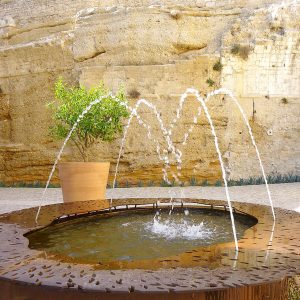 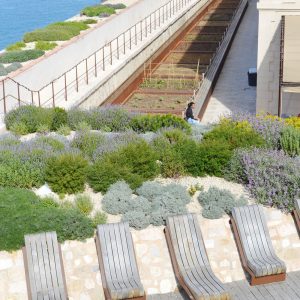 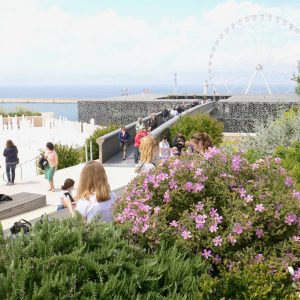 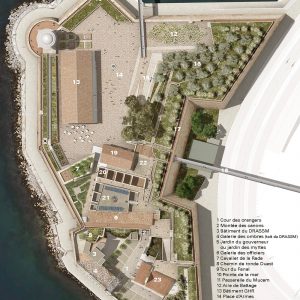 All projects by Agence APS on Landezine 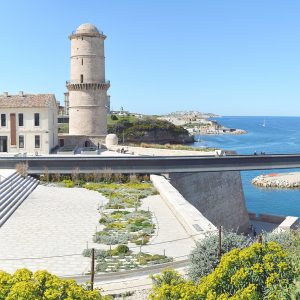 The Garden of Migrations 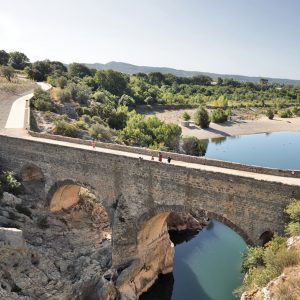 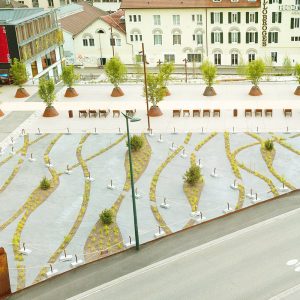