River Restoration Landscape Between the Ecology and Aesthetics 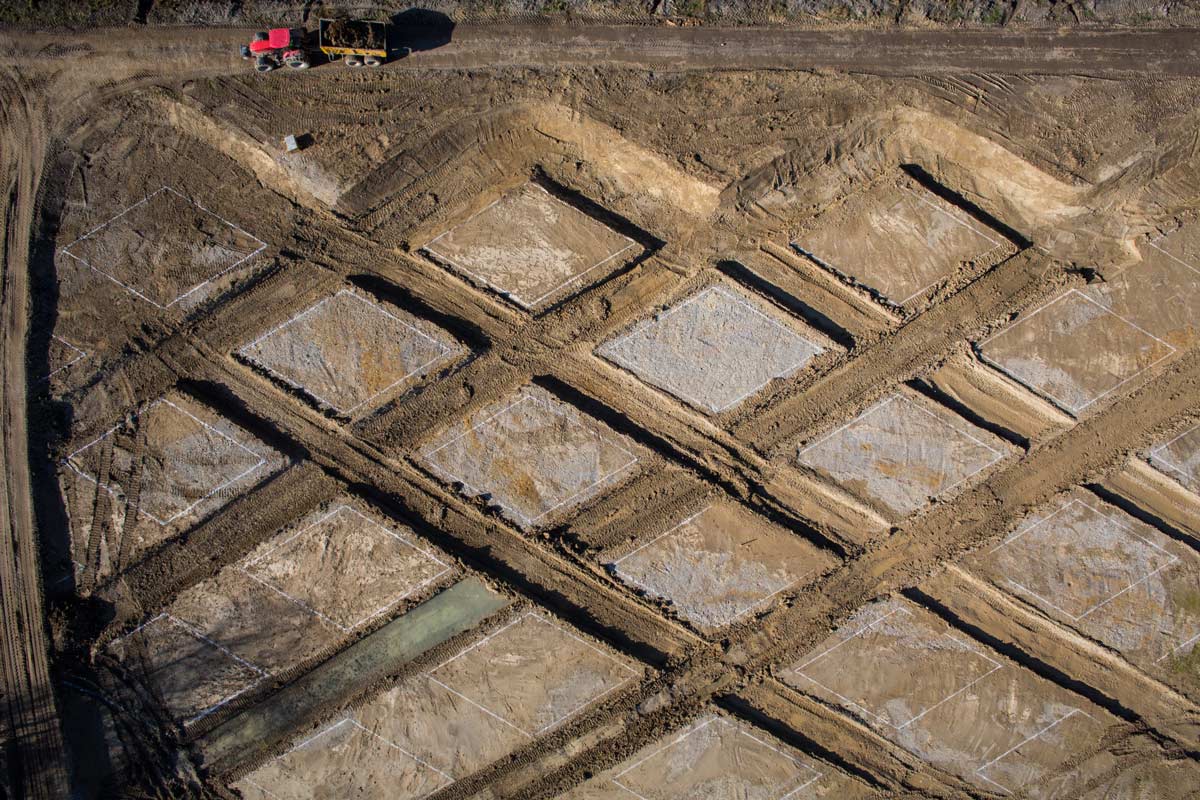 The project for ecological restoration of Swiss river Aire has been winning trophies on most visible landscape architecture biennials and conferences. After receiving Public Choice Award and standing ovations at the International Biennial of Landscape Architecture in Barcelona in 2016 it was most recently again rewarded at the LILA Awards Ceremony 2018 in Hamburg. The circumstances and the task of the River Aire project are familiar and comparable to many other water bodies in industrialized and in urbanized context around the globe. The design solution which addressed these circumstances however is groundbreaking on many levels as a materialization of contemporary paradigms in several fields from natural sciences to design. It comes as a no surprise that the project was developed by an interdisciplinary team consisting of biologists, hydrological engineers and architects. The project can be summarized as a clear statement that designed landscape is not a static everlasting entity as it develops from its morphological context and depends on it to thrive in the future.

The context of this project’s designed landscape is the River Aire, which flows from glacial moraines in France to a fertile plain near Geneva. Plaine de l’Aire where the project is situated was historically devoted to agriculture, in the 20th century industry, a major highway and housing joined. To protect these from floodwaters and to drain the farming land consequently dykes were build, a stretch of river was straightened and canalized, later underground culverts were added. Thus, the river was gradually confined and modified from a shifting and dynamic waterbody and habitat into a pure infrastructure for efficient disposal of excess flood water. Such technological solutions allow for fast conveyance of the floodwater through the area, but fatally increase the velocity and amount of the floodwater problem for the areas downstream.

River restoration projects became widespread in Europe since the establishment of EU Water Framework Directive for integrated river basin management in 2000. Switzerland is part of these efforts with its laws to improve water quality, enhance ecological value and most importantly improve access and appeal of river spaces for people. Accordingly, in 2001 the Canton of Geneva announced a competition for ecological restoration of the canalized reach of the river Aire and established a fund to finance it. Under the pressure of growing intensity and size of precipitation events however, also the existing floodwater protection infrastructure needed to be enlarged. The designers faced these tasks from a fresh perspective in terms of ecological science, flood protection engineering, landscape design as well as cultural heritage. They challenged paradigms in all those fields and synthetized them in an interdisciplinary holistic work. An experiment. A dynamic and eventful landscape for playful nature experience. 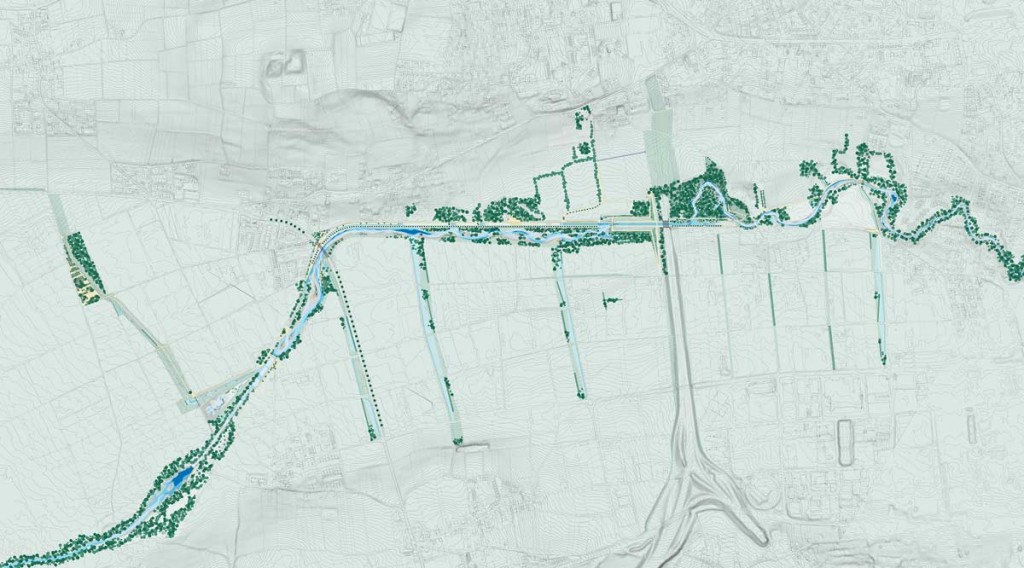 The floodwater solution and the restoration of the river Aire works systematically on several scales. Totality of the intervention which is ongoing since 2002 and the cumulative effect of all its parts improves its flood, and ecological resilience. The project started with the creation of two retention basins on the floodplains, restoring a meander bend that has been cut off and finally by introducing an ecologically revitalized portion of the river parallel to the existing channel. So, a space for the floodwater was provided locally, which allows it to run off slowly in a controlled manner, to feed and rejuvenate the floodplain ecology as well as refill the groundwater. This approach also reduces the stress and danger for the areas downstream. The ecologically restored part of the river complements the valuable existing portions of the river up and downstream of the canal. The strength of the project derives from improved function and connectivity rather than cosmetic gardening.

The ecological thought was at the heart of the project but never as a “re-naturalization”. Its goal was the establishment of a braided river pattern, as a home to riparian habitats within the river and floodplain ecosystems. Its approach was not to recreate a natural state, as an opposite to culture, but rather to acknowledge and celebrate the interdependency of both. The strategy of the project was to initiate display and stage the emergence and genesis of the natural process of fluvial morphology over time, and not to create a final, ‘natural’ state. In such a way the concept corresponds to contemporary ecological discourse.

Ecology as a science faced a paradigm shift in the past decades. The notions of stability are being replaced by ecological dynamics as a vital aspect of ecological health and resilience. The ecological theory was previously explaining ecosystem development as a path which progresses steadily towards a desired climax state. River restoration projects accordingly strived to reconstruct this climax state and preferred channel stability with the banks of the river artificially reinforced and then secured with vegetation or organic material such as wood. This was the case even for previously unconfined alluvial and meandering rivers. 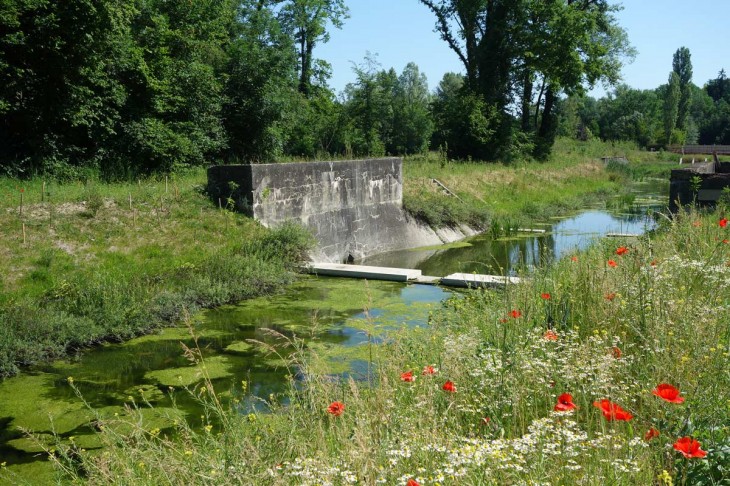 New paradigm in ecology currently explains rivers as ecological systems with inputs and outputs of material, which inform the logic of fluvial morphology. Bank erosion, deposition of sediment material and wood as well as diverse flow patterns and velocities are vital to forming and regeneration of the river bed and banks. They assure diversity of its habitats, deeper waters for fish migration and sandbars for hatching, enclosed spaces for protection. Disturbances such as bank erosion and deposition which cause these dynamics thus came to the focus of river restoration. They influence not only river ecology but also the aesthetic aspects of the spaces they create a new, through ancient morphological processes. This was the premise from which the project at Aire was established.

The design group Superpositions suggested a powerful but simple intervention to make genesis of fluvial morphology palpable and perceptible to human eye. Orthogonal diamond shaped depressions were cut in the vast otherwise featureless riverbed to establish a possible channel migration zone. The water was then rerouted to it and allowed to fight its own way through diamond shaped islands, dimensioned to match its erosive strength. By migrating, eroding and depositing freely the stream recreated its own complex braided pattern, not unlike the one that coined the rivers character centuries ago. The designers managed to reestablish its intrinsic identity, as well ecological as also formal, without imposing its finished state from the start. Instead of widening and removing the concrete canal, a new 80m wide riverbed was established parallel to it. The width offers space to enormous amounts of floodwater during the peaks. During the normal water flow, there is a number of smaller and a deeper stream to provide water for fish migration.

The sharp juxtaposition of orthogonal, man induced versus wild, spontaneous slowly merges yet always keeps signifiers of the previous states, as a testimony of its natural or cultural dynamics – as a palimpsest of its history. This stance was exhibited also in the decision to keep the existing channel as a cultural artefact and reinvest it with new meaning as a linear garden. The fortified concrete bed was removed and its banks now reinforced by vegetation are accessible by stairs or cantilevered concrete slabs to provide calm and enclosed spaces within the canal. Bridges, paths, pergolas, outdoor furniture and gardens are situated here to accommodate the majority of visitors, taking pressure of the wild riparian corridor. Both the channel and the riverbed offer a multitude of possibilities to experience the water with all the senses. Avenue of characteristic poplar trees reminiscent of in the European countryside landscape and tradition; the footprint of the existing reinforced channel once at the height of technology; added contemporary architectural elements all frame and guide the succession of experiences along the river space. The ecology, cultural relicts, flood protection features, the gardens so become an ever-changing event. The traces of past and ongoing processes bound to the region impose a new understanding and perception of time and other forces upon the landscape, society, individual and their ecologies.

Katarina Bajc is a landscape architect, currently working as a researcher at HafenCity University in Hamburg.