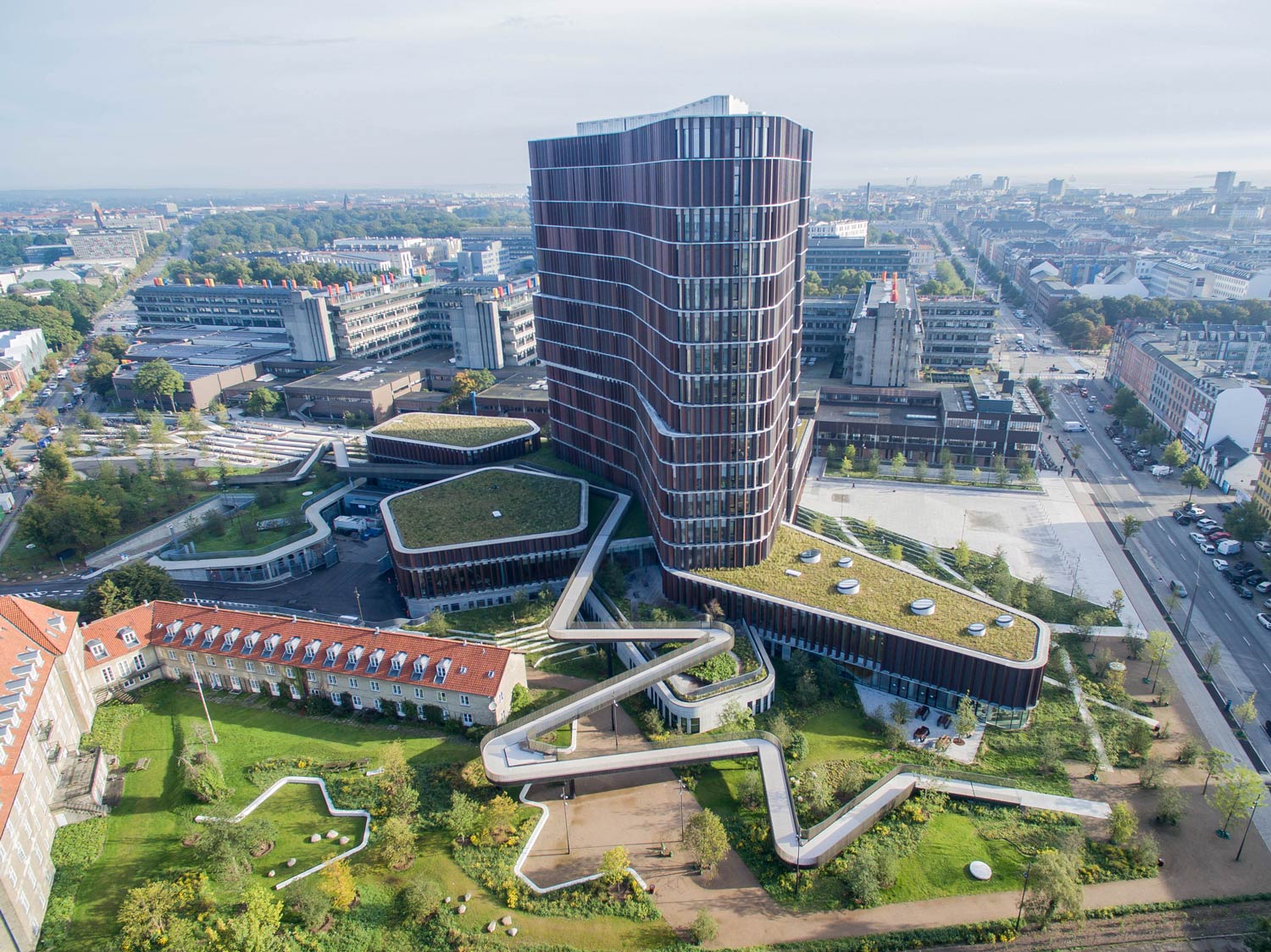 The Mærsk Tower and SUND Nature Park in Copenhagen receives Scandinavia’s highest accolade for its huge green roof designed by SLA. It is the third time in four years that SLA wins the award for best green roof in the Nordic region.

On Wednesday November 22, SLA’s founder and design director Stig L. Andersson received a special honor on behalf of SLA, the University of Copenhagen and the Danish Building Agency: The Scandinavian Green Roof Award, which honors the best and most sustainable green roof in Scandinavia every year. This year, the Scandinavian Green Roof Award goes to the huge 5,000 m2 green roof that SLA has designed for the University of Copenhagen’s new landmark SUND Nature Park / Mærsk Tower. 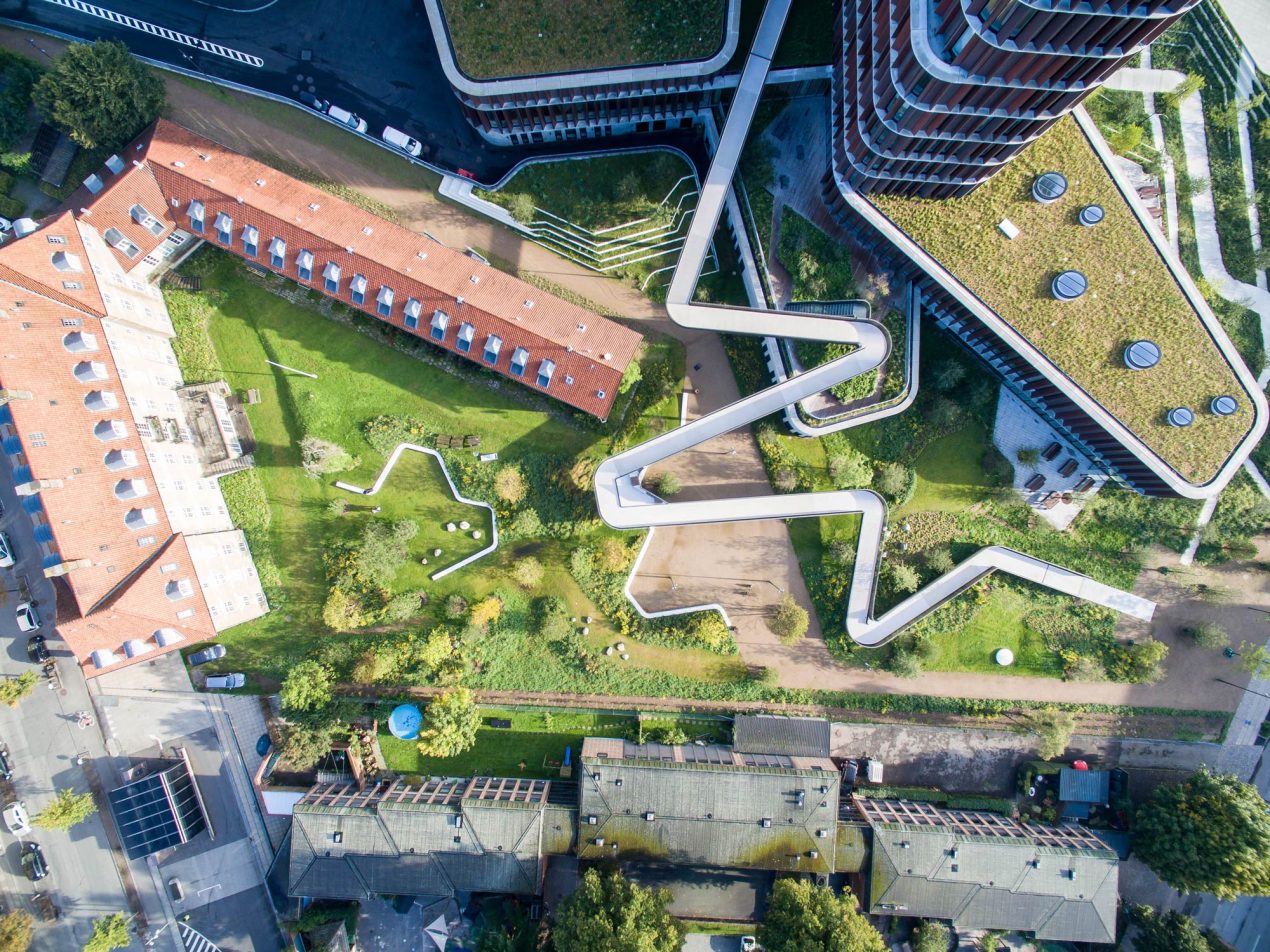 The green roof is part of SLA’s SUND Nature Park, which is a new type of urban campus park that supports the good students’ life and provides a wide range of natural and social values to the city. The large public green roof offers a variety of outdoor study places, green lounge areas and new opportunities for social gatherings for researchers, students and ordinary citizens. The green roof is designed with a high degree of wild nature, which re-establishes Copenhagen’s old public Grass Commons, which until the 1840s stretched all the way to the borough of Nørrebro. In addition, a number of exotic tree species have been added as a nod to the multicultural Nørrebro, while at the same time making roof, building and park more sustainable and resilient towards future climate change. 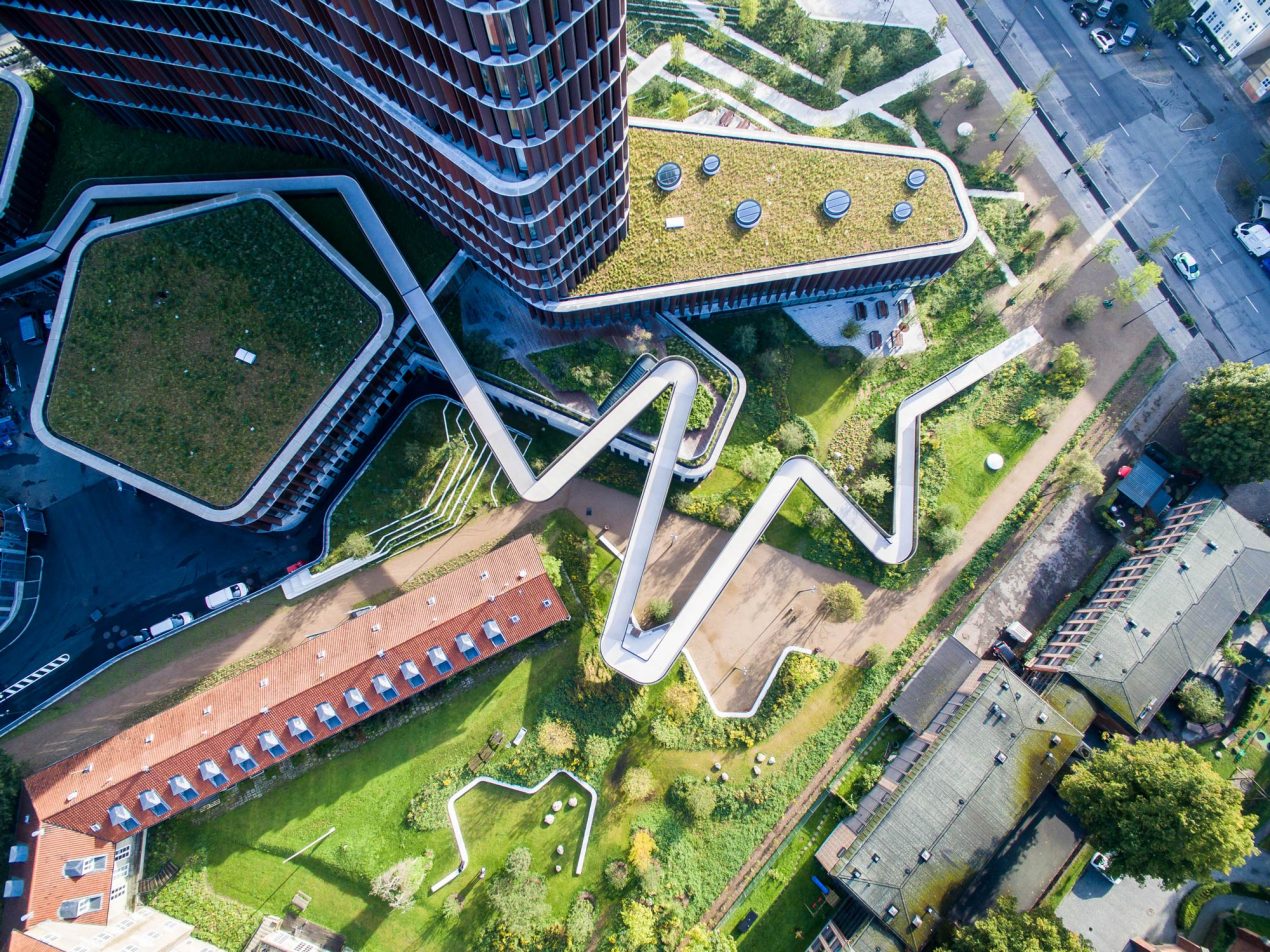 “The SUND Nature Park and its green roof offer a number of new functional and social values ​​for Nørrebro. The strong nature of the roof has a specially designed earth layer that creates self-regulated ecosystems, which can handle even 100-year rain events and recycles the rain water in the park and in the building. The roof is designed with extremely high biodiversity with native meadows and large trees. The roof is publicly accessible from both the building and the park, enabling everyone to experience Copenhagen’s new wildlife up close,” says Stig L. Andersson, founder and design director in SLA. 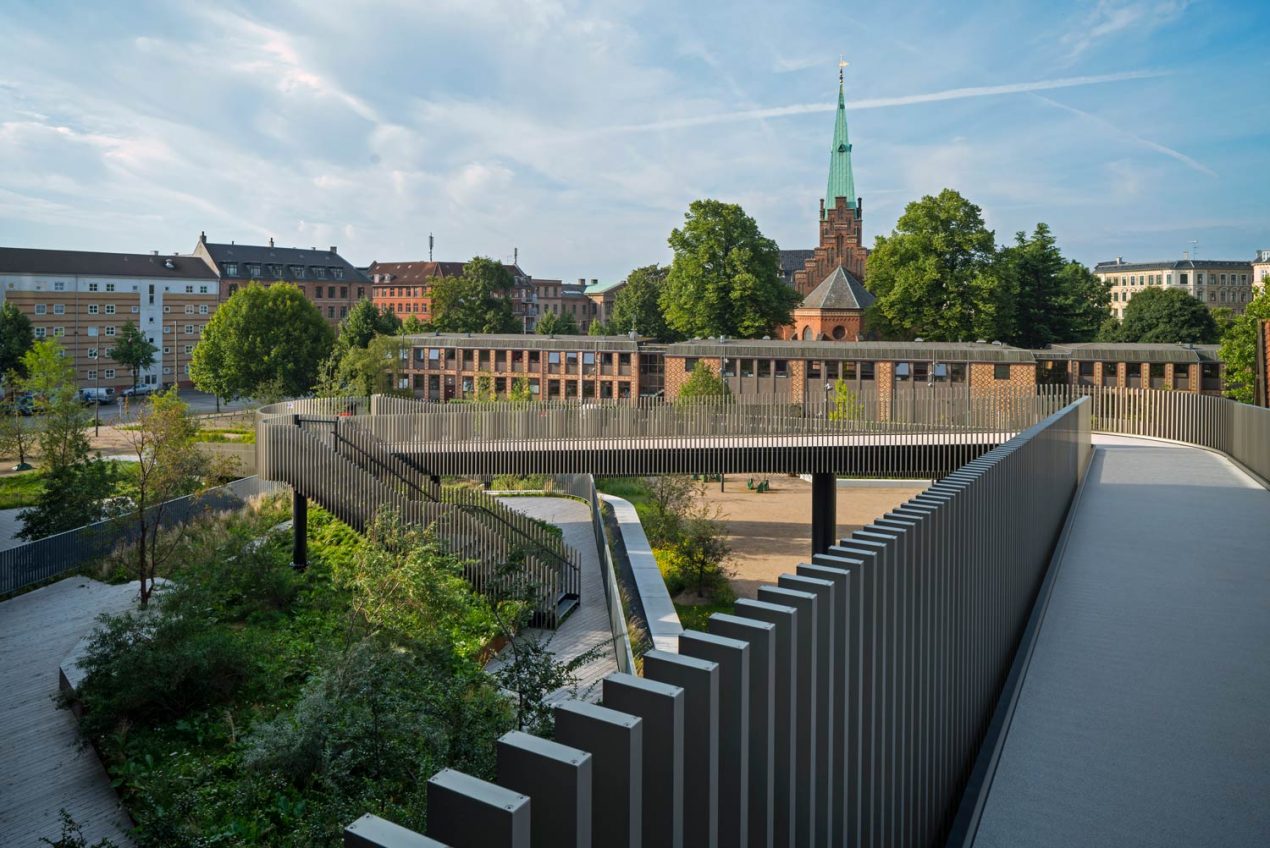 “The Mærsk Tower’s green roof successfully merges large roof surfaces of 5,000 m2 with sophisticated design and replication of different Danish habitats. As a public green roof project, it takes responsibility for the public good, being primarily based on recycled materials and with significant cuts in storm water runoff for better climate adaptation in a dense urban area.” 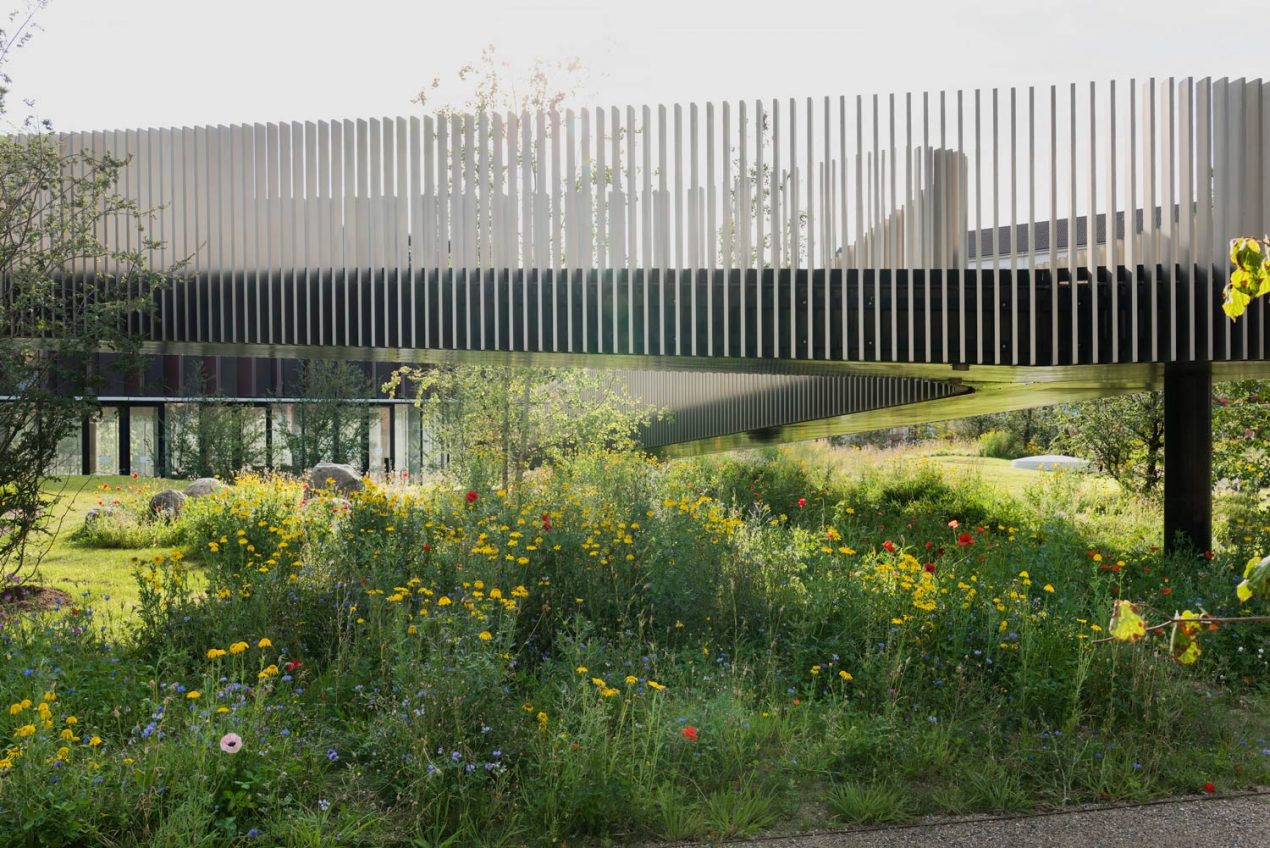 The Scandinavian Green Roof Award is Scandinavia’s leading green roof award which is given annually to recognize excellence in the field of green roofs and to inspire owners, designers and builders toward quality and innovation. It is the third time in four years that SLA wins the award. SLA’s former winning projects are Egedal City Hall (2016) and Novo Nordisk Nature Park (2014). Current SLA projects with green roofs include the Reinventer.Paris project, where SLA covers a big part of La Periferique with performative city nature, and the ski slope and green roof of the Amager Bakke waste-to-energy plant, which SLA designs for BIG – Bjarke Ingels Group.

The 5,000 m2 green roof is constructed by Skælskør Anlægsgartnere in collaboration with Byggros and Birkholm Planteskole. The building is designed by C.F. Møller. Engineer is Ramboll.
Images: © SLA

The Mærsk Tower and SUND Nature Park in Copenhagen receives Scandinavia’s highest accolade for its huge green roof designed by SLA. It is the third time in four years that SLA wins the award for best green roof in the Nordic region. On Wednesday November 22, SLA’s founder and design director Stig L. Andersson received […]