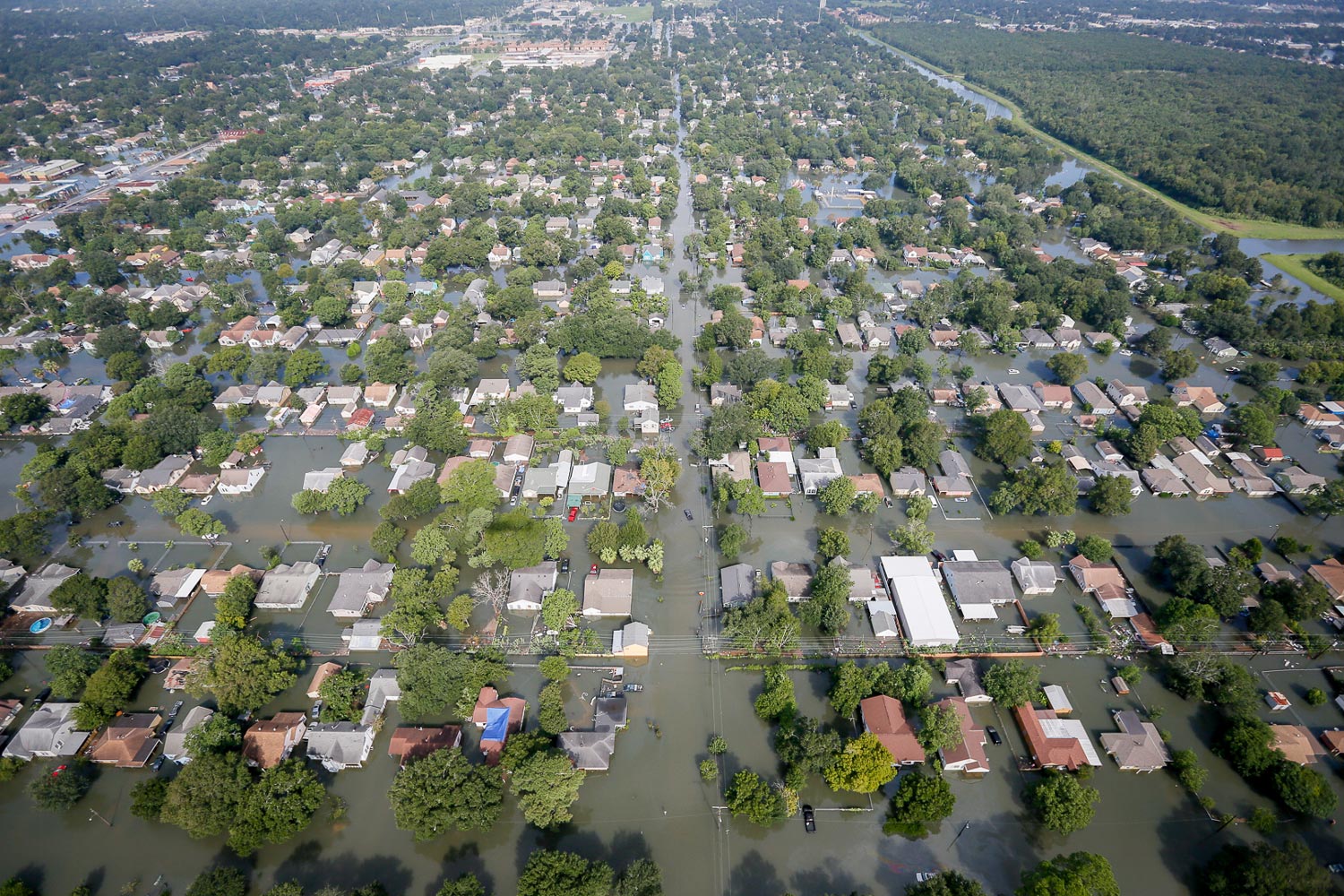 During all the media coverage—particularly in the United States—of Hurricanes Harvey (Category 4, 17 August-1 September), Irma (Category 5, 30 August-12 September), Jose (Category 4, 5-22 September) and Maria (Category 5, 16-30 September), the flooding and subsequent trail of destruction in Houston and southeast Texas, South Florida and the Caribbean, there was ceaseless talk of the ‘catastrophic,’ ‘historic’ and ‘unprecedented’ scale of the events. There was virtually no discussion of climate change, ill-conceived urbanization and the racial inequalities embedded within it, threats to human health and natural ecologies, the need to upgrade severely dilapidated infrastructure or even the continuing practices of 21th century colonialism (evident in much of the tourism-dependent Caribbean with Dutch, French, British and American ‘territories’). 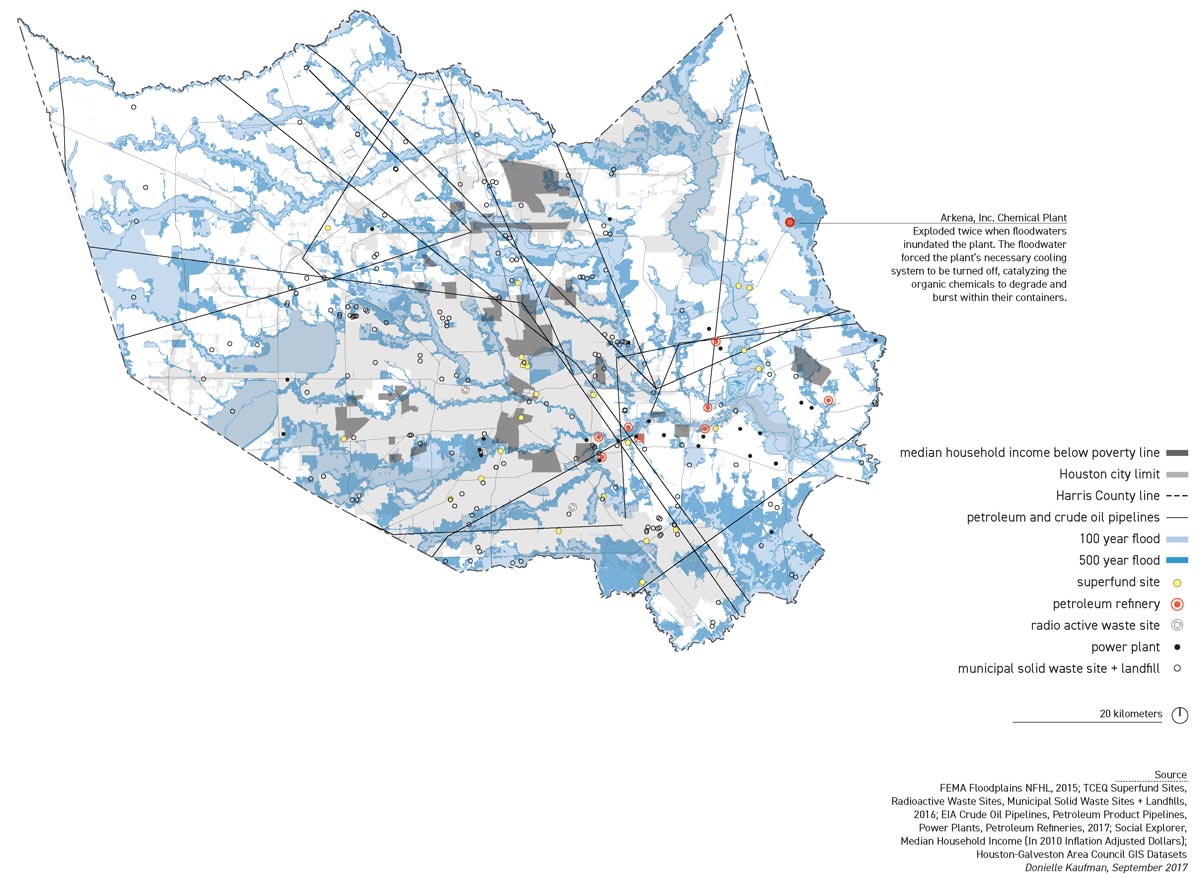 Yet, for decades, science evinces that the world has become significantly warmer: experts have numbers to back their claims. Since humankind has burned so much oil, gas and coal, we are responsible for massive clouds of CO2 and methane in the air. The structure of those molecules traps heat, thus warming the planet. As a consequence, there are heavier rainfalls and stronger winds (along with drier forests and fields—fueling droughts and forest fires elsewhere). With regards to hurricanes, warmer air can hold more moisture. In the case of Harvey, the Gulf of Mexico waters have become warmer (4° C above average in August) and with a deep layer of warm water that the hurricane fed upon as it neared the coast. Scientists say that climate change is causing extreme weather events, including torrential rain, to happen with greater intensity and frequency. Sea level rise, coupled with storm surges are resulting in repetitive flooding in areas of low-lying urbanization, all the more compounded by greater areas of impervious surfaces resulting in more runoff. As well, the odds are changing: 100-year (an area with a 1-in-100 chance of a flood event in any given year) and 500-year flood plains have been rendered obsolete due to climate change. Federal flood maps, made by the Federal Emergency Management Agency (FEMA) are not cognizant of reality; they rely on outdated historic data and not projections for the future. In 2015, the Obama administration updated flood-risk standards for the first time since the 1970s, incorporating climate models and sea-level rise into calibrations for building elevations. The new standard required federally funded buildings in flood plains to be built at higher elevations, especially for critical infrastructure like hospitals and fire stations. On 15 August, Trump erased the standards with one line (Sec. 6. Executive Order 13690 of January 30, 2015 (Establishing a Federal Flood Risk Management Standard and a Process for Further Soliciting and Considering Stakeholder Input), is revoked) buried in the ‘Executive Order on Establishing Discipline and Accountability in the Environmental Review and Permitting Process for Infrastructure.’ The policy change mirrors broader principles, since the Trump administration does not accept human-induced climate change. 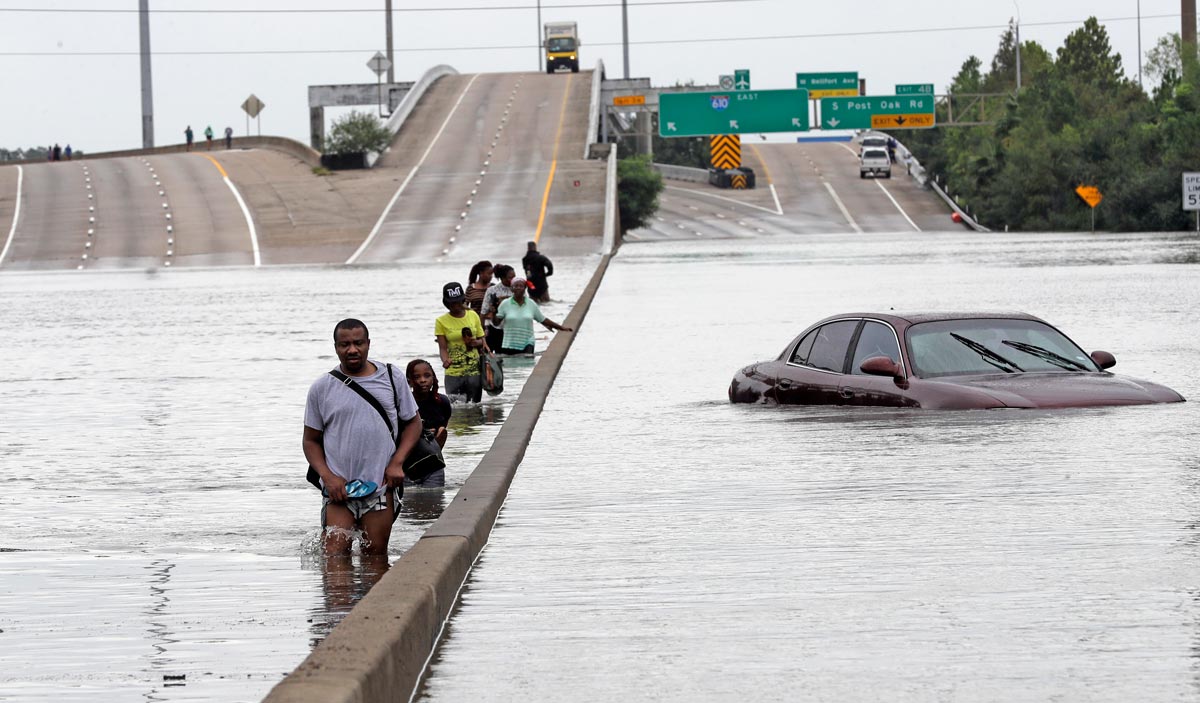 Evacuees wade down a flooded section of Interstate 620 as floodwaters from Hurricane Harvey rose on 27 August in Houston. (© AP Photo by David J. Phillip)

As the string of hurricanes was a wake-up call for many Americans to new environmental realities, Scott Pruitt, the administrator of the Environmental Protection Agency (EPA), proclaimed it was ‘very, very insensitive’ to discuss climate change in the midst of deadly storms. In Florida, Rick Scott, multi-millionaire Republican Governor elected in 2010, has discarded landmark growth management that forced developers to consider impacts of projects on public amenities like parks and roads. He slashed budgets for water management and prohibited state environmental oﬃcials from using the terms ‘climate change,’ ‘global warming,’ or ‘sustainability’ in oﬃcial communications. In Texas, Republican Governor Greg Abbott is also considered a ‘climate denier;’ he has admitted that the climate is always changing, however that the human impact on it is a matter of dispute. Climate change discourse in the US remains hotly contested and ensconced along partisan lines. Environmental activist and writer Naomi Klein has recently commented, President Trump, by focusing on tax reform as Irma bore down on the US, confirmed the climate change deniers’ core issue is a rejection of the consequences of science (as opposed to its wholesale rejection). 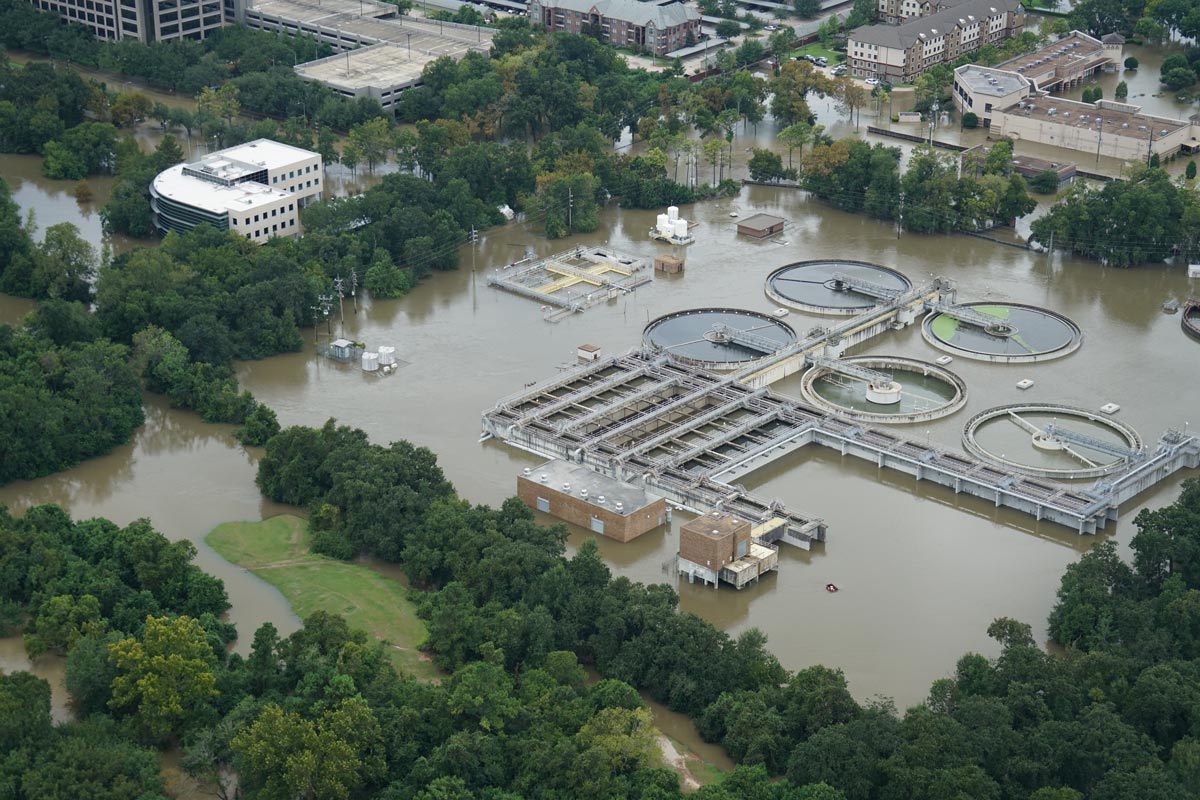 The environmental impacts of Hurricane Harvey are wide-reaching and the full implications not yet known. (© Adobe #169777698)

In the continental United States, Hurricanes Harvey and Irma were harsh remainders that Mother Nature never intended humankind to live in the geographies they struck. Houston, founded in 1830s on the banks of a bayou amidst a humid and sweltering swamp, prospered despite flood after flood and explosive growth with low-intensity sprawl due to its historic aversion to regulation, limitless entrepreneurialism and riches of the petroleum industry. Over time, the city grew to be the nation’s fourth largest city as developers’ encroached into wetlands and prairies that used to serve as natural sponges. Meanwhile, Southern Florida—once the country’s last frontier and only truly settled after the ‘Wild West’—was considered a barren wasteland, uninhabitable and swampy peninsula, dominated by the vast Everglades. It was peddled by hustlers and visionaries as a tropical paradise. Today, Florida is the third most populous state with uncountable retirement communities, resorts and golf courses. The Texan and Floridian boomtown regions tamed inhospitable quagmires with advanced water management of the US Army Corps of Engineers and conquered both uncomfortable climates with air-conditioning and tropical pests and vermin with bug spray. Federal flood-protection standards were deliberately kept weak enough to foster unsustainable development in flood plain and disaster-prone areas. As millions as literally flocked to the large territories reclaimed from nature, there have been ample warnings by scientists, environmentalists, academics and progressive urbanists and landscape architects of the risks of such the unparalleled destruction and inevitable backlash. In 2016, Pulitzer-prize nonprofit reporting agency Propublica with The Texas Tribune wrote an in-depth story with interactive maps and archival material, Boomtown, Flood Town of why short-term and ill-conceived development and economic gains for Houston could equate to its catastrophic ruin. Man-made defenses failed: seawalls to keep ocean waters at bay crumbled, reservoir and dam levees collapsed, massive areas of sand reclamation/ beach widening (as protection from storm surge) was blown away and pumps could were neither enough plentiful nor efficient to counter the massive flooding. 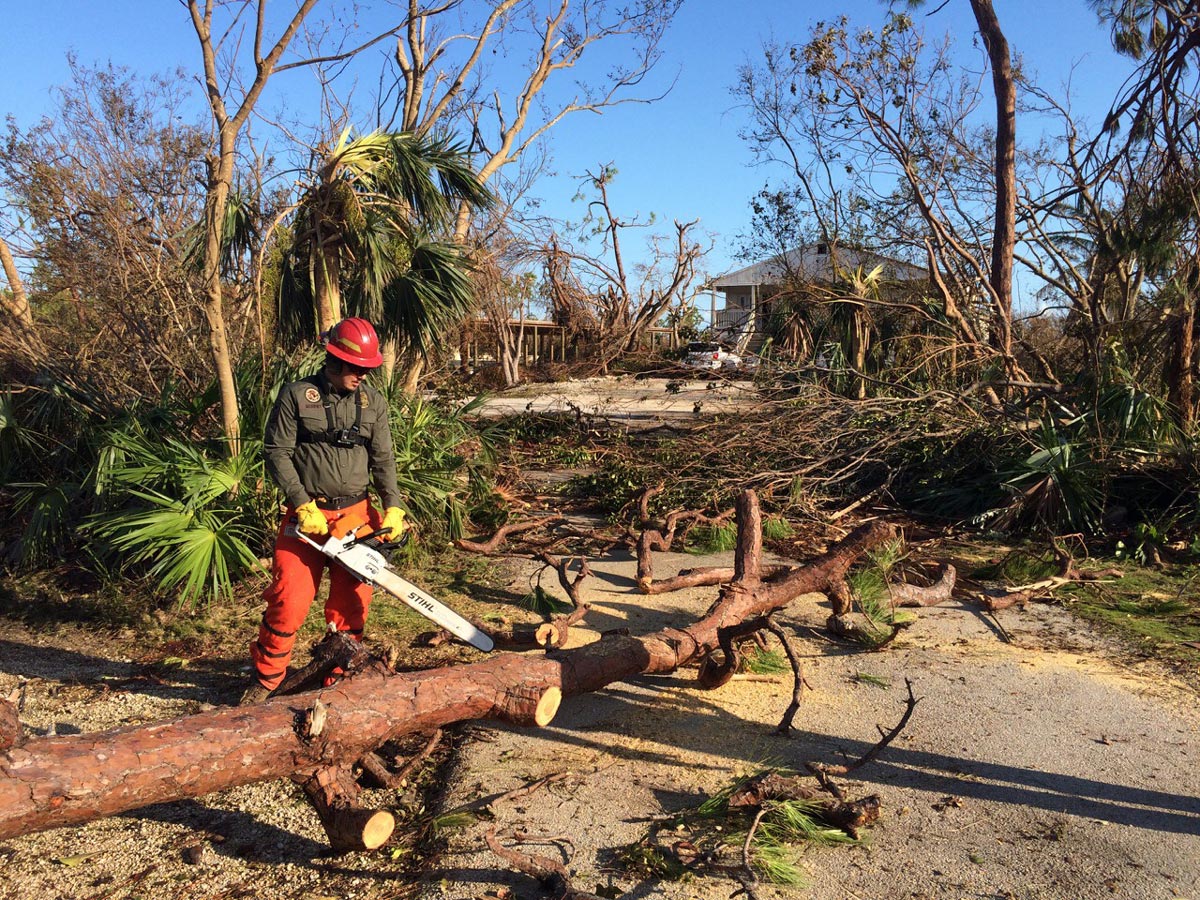 As floodwaters recede, social and humanitarian disasters are surfacing in the hurricanes’ wake. Due to Harvey and Irma, Texas and Florida have had forced evacuations, flooded Superfund sites (identified by the federal government as hazardous toxic waste sites), pipeline leaks and a chemical plant explosion. Both states have witnessed a disproportionate impact of the storms on their low-income and communities of color and past rebuilding has revealed a pattern of ‘regressive reconstruction,’ where concentration of vulnerability replicates space according to environmental, economic and racial hierarchies. Corporate-friendly business insurance schemes have ethical blindspots and the federal flood insurance program is mired with debt; it must be stated that most homeowners, even in known hurricane paths do not have flood insurance of any kind. Meanwhile, the American territory of Puerto Rico had not only its dilapidated energy grid wiped out but as well it entire agricultural irrigation system upon which most of its economy depended. The 3.4 million citizens have been told they might have to manage without power for several months and the ravaged island, liked others in the Caribbean are facing severe water, fuel and food shortages. 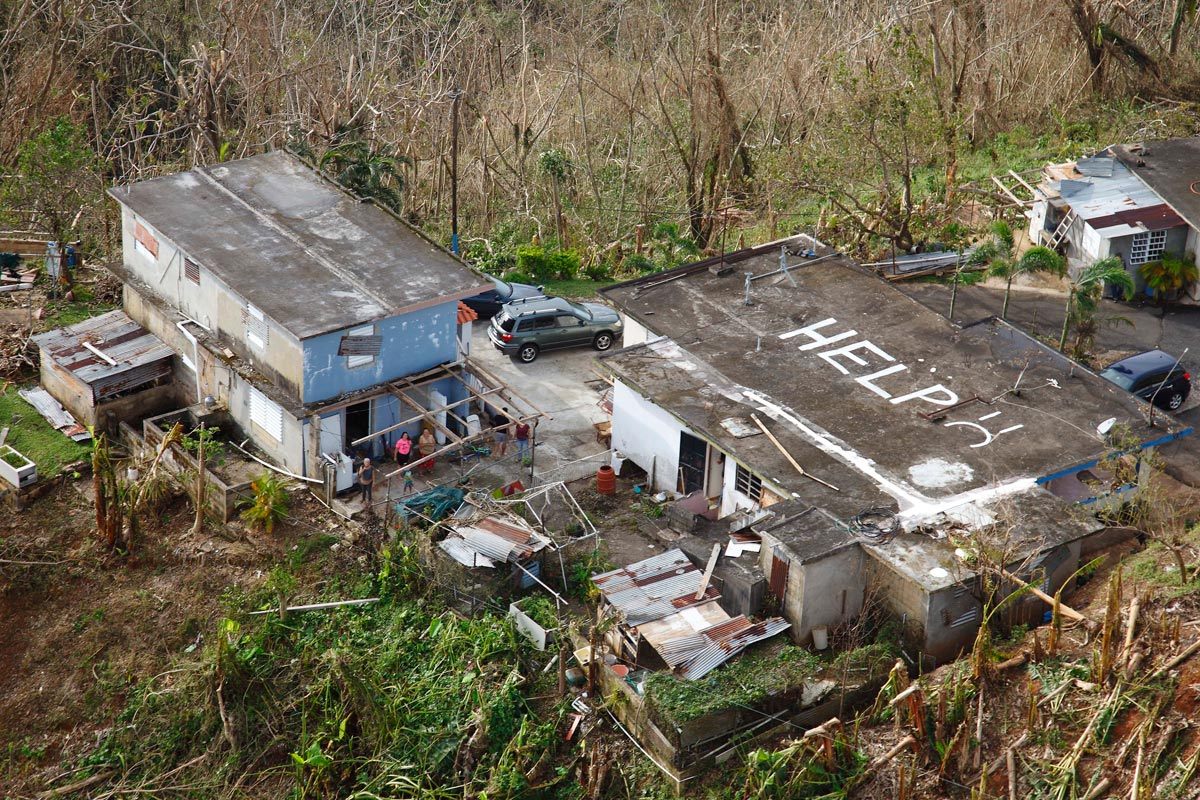 Pleas for assistance have been coming formally and informally from politicians and citizens in Puerto Rico following Hurricane Maria (© U.S. Customs and Border Protection Photo)

Climate Changed. Waters (un)Settled. Landscape architecture and urbanism must proactively and innovatively respond to the ever-evolving conditions linked to global warming and rising seas, energy, water and food security and increasing urbanization. Over centuries, the US Army Corps of Engineers in America, and similar public and private infrastructure builders worldwide, attempted to domesticate and ‘civilize’ nature. Waters were settled: there was seemingly an agreement reached between nature and the city, the opposing forces of the environment and the economy, and the inhabitation of previously wet places. That is until all was UNsettled—when the engineering failed, when nature showed her force, when the climate changed. Water prevailed. 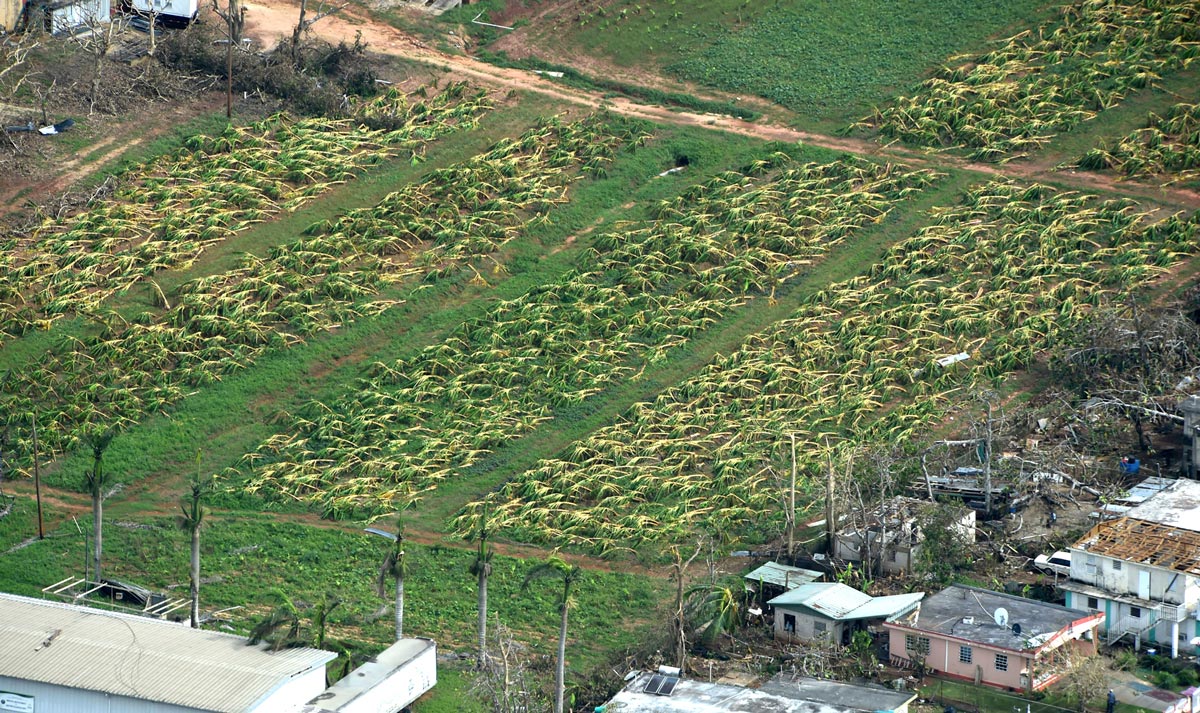 Now more than ever is when design strategies can make a difference. How and where to rebuild and not rebuild? Where is organized coastal retreat necessary and how can ecologies be reestablished? What new landscape, infrastructure and settlement typologies can co-exist with evolving climate and water rhythms? How can afforestation be developed to simultaneously protect fragile coastlines and create new economies (including renewable energy)? Can humankind admit development mistakes and relinquish reclaimed land back to nature? Environmental law, together with landscape architecture, infrastructure and urbanism create man-made frameworks for habitation: all must be recalibrated in light of the shifting dynamics of territories, particularly coasts and islands where the entire city / nature paradigm must be rethought. The (un)settled waters brought by climate change is a time for deep reflection and only afterwards for serious multidisciplinary reconfiguration.