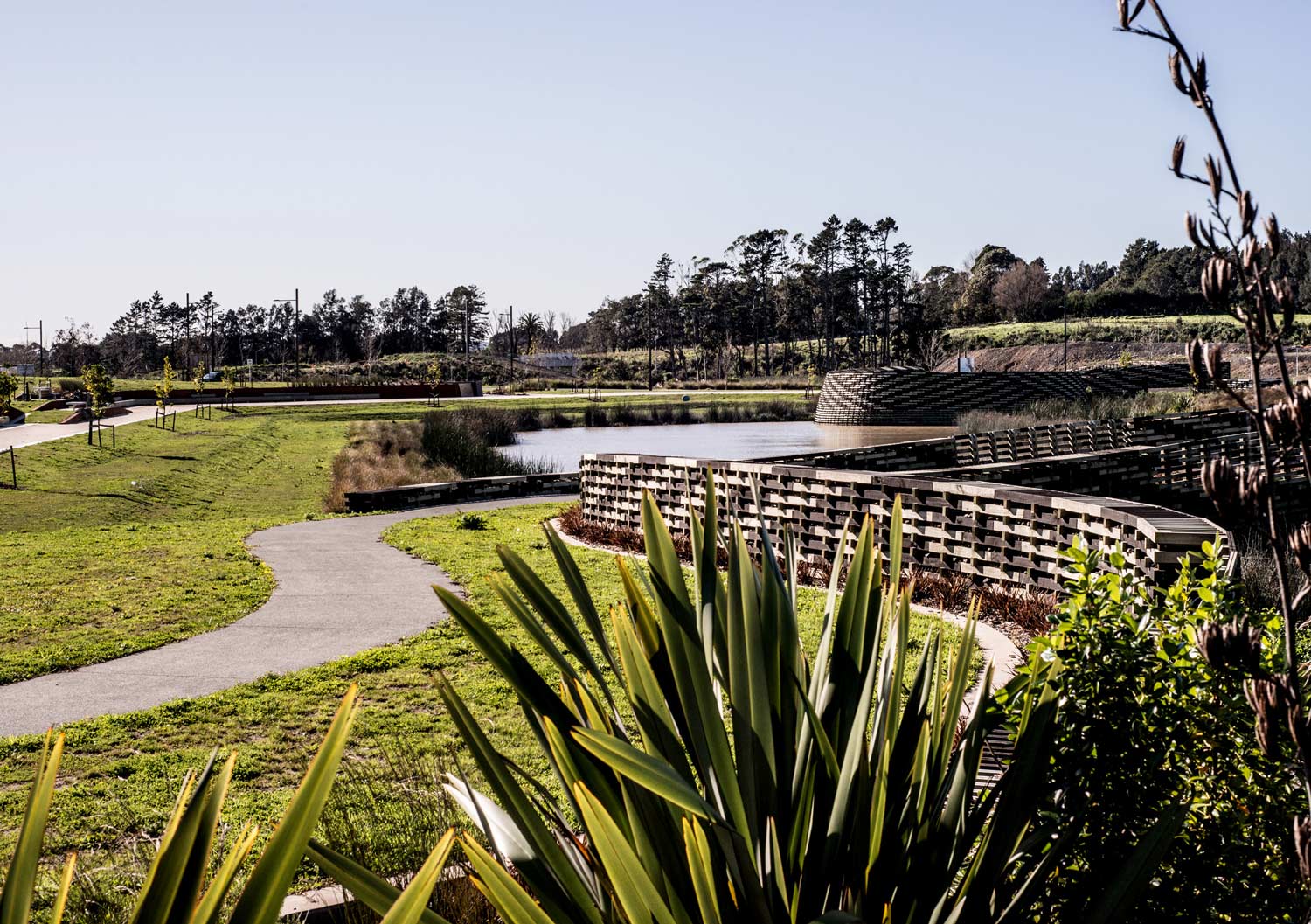 Since 2008 the British business group emap organizes the World Architecture Festival, a content driven event headed by the long-time experience of Architectural Review and the journal’s renowned editor–in-chief Paul Finch. The festival is both a yearly communication hub and a business model. In many architectural categories an award is presented. Landscape has just one category and has suffered from the beginning from very few entries. This is why a courtyard design is competing with an ecology driven masterplan. Turenscape from Beijing, PR China has been the bravest contributor and won several awards in this category over the years.

After taking place in Barcelona from 2008 to 2011 and then in from Singapore 2012 to 2015, WAF went to Berlin this year for the ninth edition under the theme „Housing for Everyone“. Given that most people already live in cities, and this number is only increasing, housing is an urban issue and has to be seen from a much wider perspective than merely the house. Accordingly, the concentration on single categories of houses has to be questioned under the existing challenges and needs for cities and landscapes.

Some architects speaking at WAF, like Ben van Berkel, are aware of the role landscape has for the development of human scale environments. Others like Patrick Schumacher from Zaha Hadid Architects wish to abolish all regulations and liberalize the building market, cynically asking London Hyde Park to deliver to investors and be built.

I am happy that the Building of the Year 2016 award went to a cultural building which in itself is part of a new urban space: The National Museum – Dialogue Centre Przełomy in Szczecin, Poland by Robert Konieczny- KWK Promes. The project consists of an atmospheric underground museum below an expansive, undulating public plaza, adjacent to Barozzi Veiga’s Philharmonic Hall. 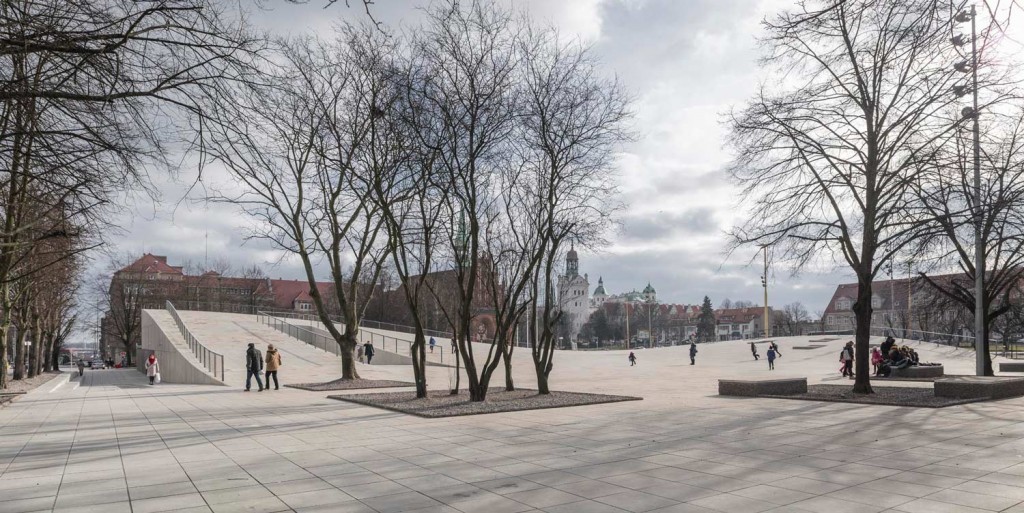 The way a cultural building allows itself to function as a public open space reminds one of the Oslo Opera and Ballet building by Snøhetta, as well as Francis Kéré’s design for the new parliament building in Ouagadougou / Burkina Faso, which shows similar ideas on how to democratize the city’s space. A comprehensive exhibition on Kéré’s work “Radically Simple” is to be seen in Munich’s Pinakothek der Moderne till February 27.

Sir Peter Cook, one of the founders of Archigram, just 80 years old and a regular to WAF, encouraged students and professionals to break the limits in order to receive new and better results. Many of the group’s ideas were rather experimental. Utopias, such as Arcadia, Vegetated Lump and Hidden City, where the architecture was inspired by the surrounding vegetation, its beginning and end blurred, merge organically into nature. A Peter Cook retrospective is exhibited at the Tchoban Foundation in Berlin until February 12.

Entries showed roof gardens and other natural components, but in general not enough striking proposals were presented, which show how to meet the challenges of urbanization, climate change adaptation and so on. Effective planning in this respect only can be achieved by interdisciplinary thinking and cooperation, where landscape architects will play a role in fitting things together. One example of the above was hidden in the landscape category, Offenbach Harbour in Germany. This is an ongoing project for 15 years, still not yet accomplished, which if it would have been completed, the jury would not have an other option than rewarding this comprehensive planning scheme. Rambøll Studio Dreiseitl from Germany took the lead in this integrative planning process, which influenced the city’s development beyond the harbour restructuring. 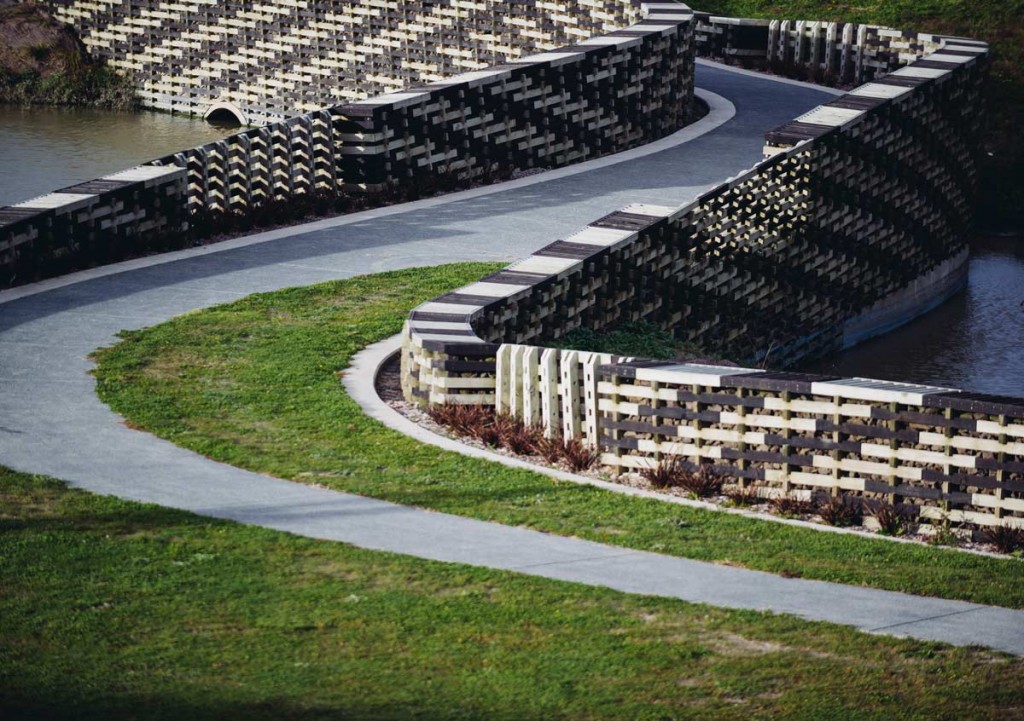 The landscape award went to Isthmus group from Auckland, New Zealand for Kopupaka wetland reserve, featuring woven timber structures, deriving from Maori woven baskets once used for catching eel. The Kopupaka Reserve is a 22-hectare landscape made up of five storm-water wetlands.