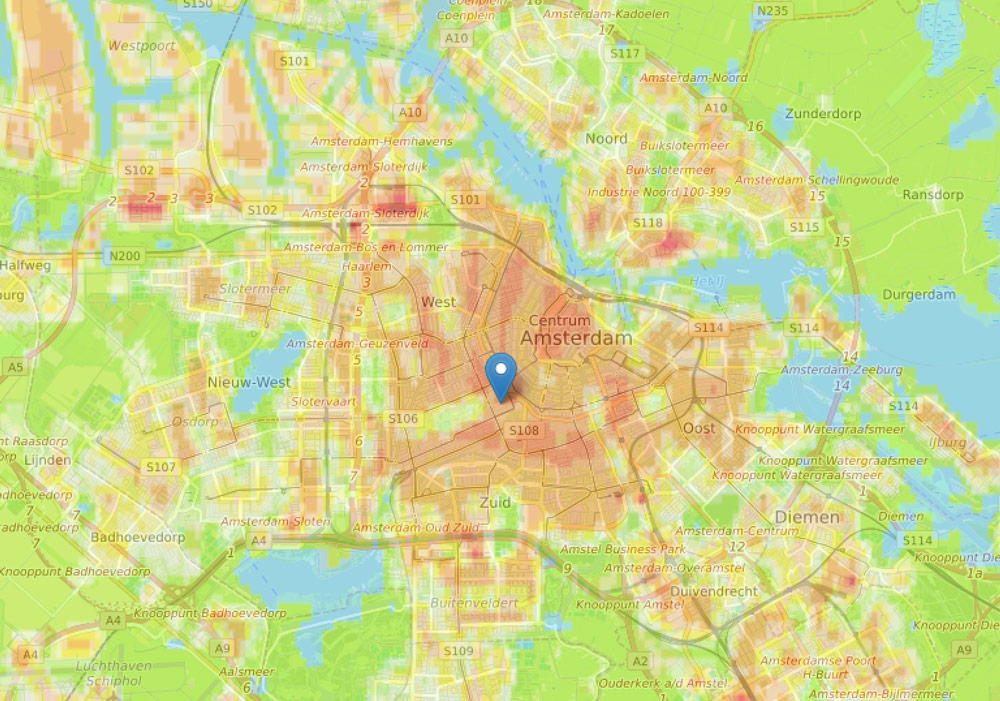 Have you suffered from the heat during the summer? Or were you, during cooler weather, almost blown over in a large square or around a tall building? Then you’ve experienced typical urban climate phenomena. Heat and wind in the city are both local urban climate phenomena that affect townspeople’s daily life. But everybody can also change the urban climate for the better. Individual house dwellers can take several measures to prevent uncomfortable microclimate around the house and garden. Think of greening facades and open green spaces surrounding a home. Also, designers and planners can do a lot to provide better microclimate in public spaces, for example by placing shade trees or windbreaks in the right places, by keeping ventilation areas open, by using materials that store little heat or areas of removing pavement where possible. 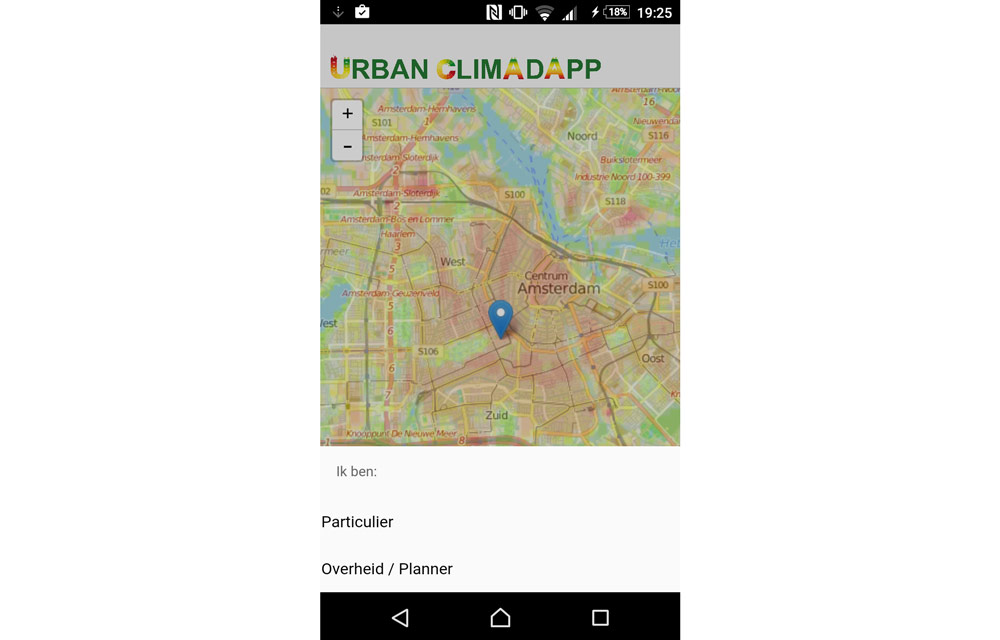 But how can we motivate house dwellers and public space designers to apply appropriate adaptation measures in the city? What can help people to take first steps toward implementation? Our assumption was that a new smartphone app could be useful. In such an app people could see in a few clicks what the urban climate problems and potentials are and what suitable solutions can be implemented. We were very glad that our grant proposal to develop such an app was approved and started working on the app immediately from the beginning of this year on.

In order to get to know the wishes of users we involved stakeholders from Amsterdam: the municipality, the ANMEC foundation and interested citizens. The main outcomes were that the app should show a map with the urban climate problems (e.g. different urban heat classes) and potentials in a simple and easy-to understand manner and provide location-specific realistic recommendations for adaptation. 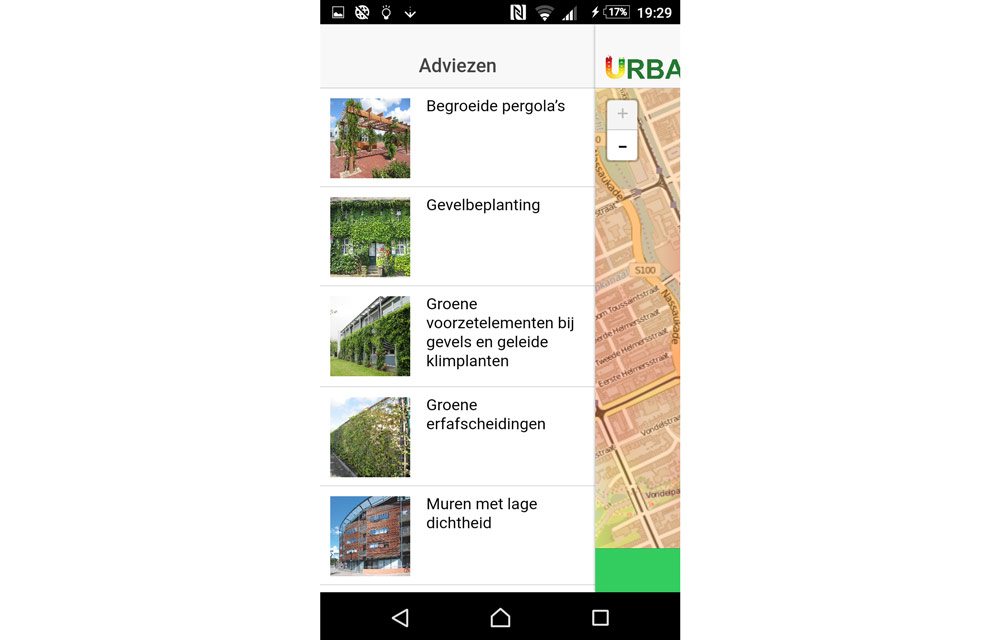 Subsequently, we generated the Urban Climate map. We base the subdivision of the map into urban heat classes on the Local Climate Zone system and areas where wind nuisance problems and refreshment by ventilation may occur. The beta version of this map was shared with our stakeholders in Amsterdam. They provided us with feedback based on their local knowledge. Their feedback was evaluated and the urban climate map was adjusted and fine-tuned accordingly.

We also generated a catalogue of possible urban planning and design interventions that can prevent negative urban climate phenomena (e.g. heat and wind nuisance) and that enhance positive phenomena (e.g. ventilation). The proposed interventions entail more than thirty types of planning and design measures. The largest part focuses on tempering urban heat problems and a second, rather extensive group of design measures addresses wind problems. The suitable adaptation interventions against urban heat were ranged according to urgency: a larger amount of adaptation recommendations was assigned to the most problematic areas and less recommendations were given for less problematic areas. The interventions for wind were given depending on the local situation. 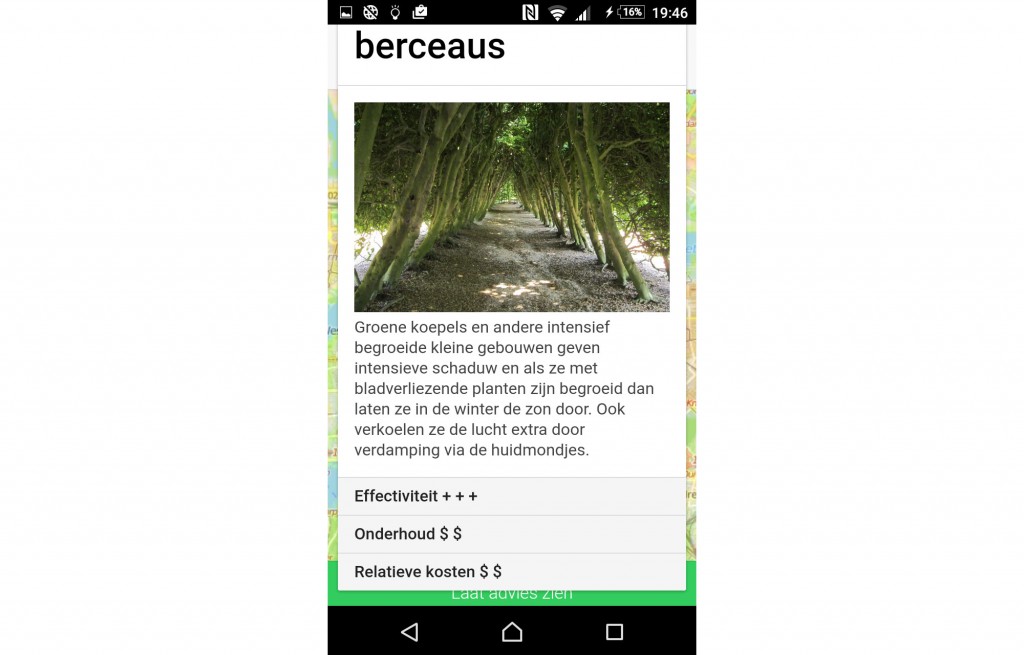 This catalogue of measures is targeted at two different groups: private parties (e.g. house owners) and designers of public spaces and urban planners within the municipality or urban and landscape design agencies. Therefore, the Urban ClimAdApp users first indicate to which user group they belong when starting to use the app. As such, the app provides them with recommendations that fit their situation.

The urban climate map and the catalogue of design interventions were eventually linked in the Urban ClimAdApp. The linkage is based on geographical position data. The result is a site- and user-specific advice for design and planning interventions. People can now see how they can solve problems related to heat and wind in their immediate living environment in Amsterdam by using the “Urban ClimAdApp”. We expect that with this app, people can be made aware of the plethora of measures that city dwellers (residents, homeowners, designers and planners) can take to improve the microclimate of their direct living environment and of the entire city of Amsterdam. 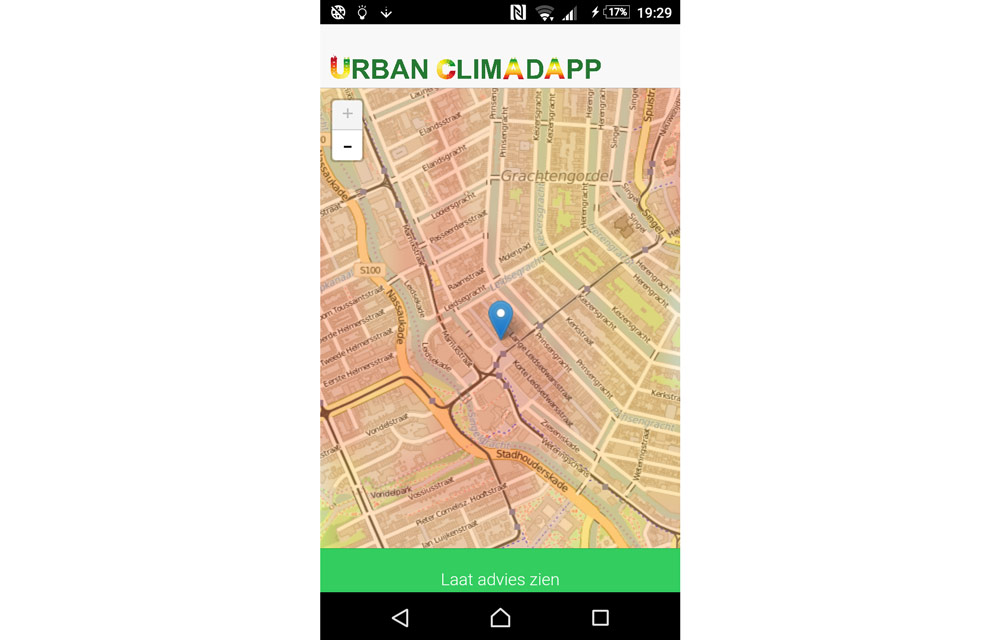 The app is based on scientific knowledge generated by specialists from Wageningen University. Meteorologists Gert-Jan Steeneveld and Natalie Theeuwes made a city climate map for Amsterdam that forms the basis for the app. Urban Climate Adaptation specialist Sanda Lenzholzer prepared a catalogue that provides location-specific information on adaptation measures. Gert Sterenborg programmed the app and Claire Oude Aarninkhof acted as concept-consultant. This project is an AMS stimulus project, funded by the Amsterdam Institute for Advanced Metropolitan Solutions (AMS) and Wageningen University.

If you have questions, please consult Sanda Lenzholzer

The app (currently only available for Amsterdam) is downloadable via the following links:
Download for Android
Download for Apple

How can we motivate house dwellers and public space designers to apply appropriate adaptation measures in the city? What can help people to take first steps toward implementation? Our assumption was that a new smartphone app could be useful.