We believe landscape architecture can be instrumental in dealing with the environmental and societal challenges we are facing. A better world requires a better spatial organization of our living environment. Therefore Felixx explores landscape architecture as a pragmatic utopian practice. Engineering landscapes as smart spatial systems, while envisioning them as the paradisiacal environments to live in. By hitting this promising overlap between pragmatism and idealism, we want to improve the world we are living in and realize happy environments.

Felixx works on integrated projects, and operates in collaborations with related disciplines and relevant experts. Realized projects are Jaanila Sportpark in St-Petersburg (RU) in collaboration with KCAP Architects & Planners, the asylum seekers center in Ter Apel (NL) with DeZwarteHond, and the metropolitan river park in Amsterdam (NL) with DRO.

Felixx has an international working field, allowing for the interpretation of local conditions, while applying the expertise gained with comparable tasks at a different spot of the world. Current projects include a park design in Amsterdam, the transformation of a former harbor area in Iceland, different redevelopment projects in India, Indonesia China and Myanmar, and a few large scale residential developments in Russia and Germany.

The work of Felixx is published around the world, and received multiple awards. The founding partners of the office are lecturing on a regular base, and are connected to different universities as visiting lecturer. The office is named after the illustrative bearded guy Felixx, who travels around the globe to hunt for opportunities to create a better world. 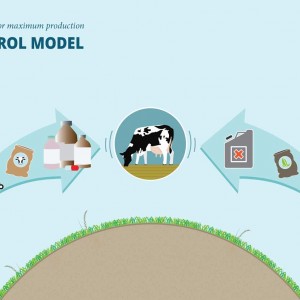 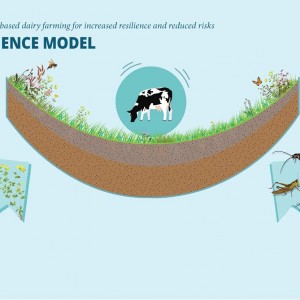 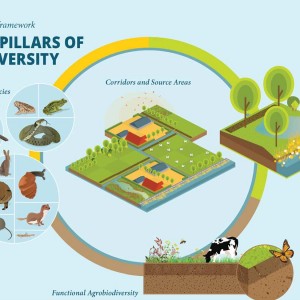 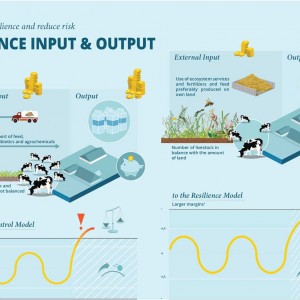 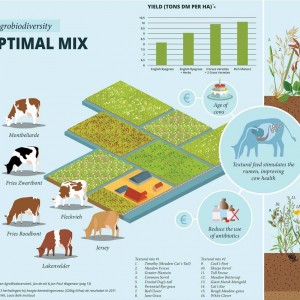 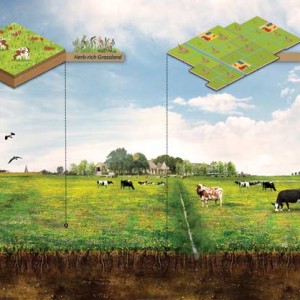 The project investigates the spatial impact of a biodiversity-based dairy farming system. It guides you through the transformation from the current approach to dairy farming in the Netherlands, which is based on maximizing production through intensification, to a new model that builds on biodiversity to increase resiliency and reduce risks. It visualises the urgency to transform the current system. Subsequently the project provides building blocks for the alternative biodiversity-based farming model. The building blocks are implemented in a pilot area, to contextualize the generic measures, and illustrate what a transformed dairy farm and landscape would look like in a specific cultural and ecological environment.

The project builds on the academic framework for biodiverse dairy farming, developed by the Louis Bolk Institute. The framework describes the current system as a ‘control’ model, artificially boosting cultivation conditions and eliminating undesired natural processes. The proposed ‘resiliency’ model builds on these natural processes to optimize cultivation conditions. Therefore 4 interconnected pillars of biodiversity are defined: functional agrobiodiversity, landscape diversity on the farm, specific species and corridors + source areas. The 4 pillars generate a variety of interventions and measures, considering different themes, addressing multiple parties, influencing literally every scale level of the agricultural landscape. Transforming these academic recommendations into physical interventions revealed the spatial impact and through this the identification of possible connections and conflicts. Moreover the tactile representation of measures allowed for a truly integrated process, making the potentials and impact understandable for all stakeholders. 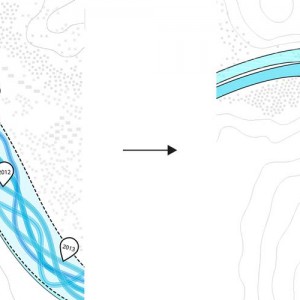 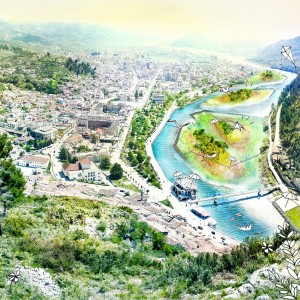 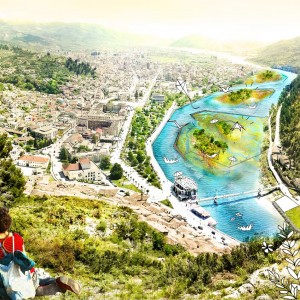 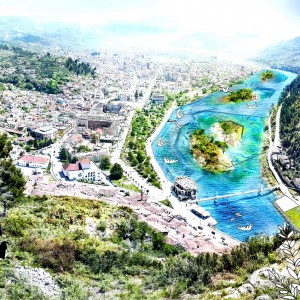 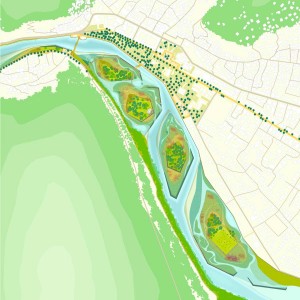 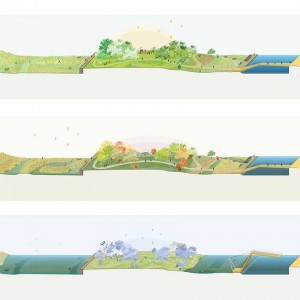 The project centres around a group of temporal islands in the Osum River. The seasonal variability in discharge of the Osum is large: during summer the river’s baseflow barely sustains a small stream, and in spring the steep river basin can cause extremely high discharge levels. Due to the seasonal difference in the river discharge, the islands’ morphology is continually changing. While these dynamics might be regarded as a characteristic feature of the Berat river, they also limit or even prevent actual use of the islands. The hydrology of the Osum River defines to a large extent Berat’s problematic position: located on elevated and steep river banks the city is well prepared to cope with high water levels. But during periods of low flow, the city is unable to capitalize its position along the river.

Therefore, we guide the water stream of the Osum River in such a way, that it adds spatial quality to Berat in every season. We combine small interventions with the potential building capacity of the river: a controlled erosion and deposition of river sediment to create sandbanks and channels. Thus, by carefully introducing structures in the riverbed, we can use the river flow to create ‘islands’. Manipulating the river flow patterns by a ‘building with nature’-approach provides the tools to enhance the usability of the islands. We are able to let islands shrink and grow, reaching a minimal footprint during winter and spring, when water levels are high, and a maximal footprint during summer when the water level is low. 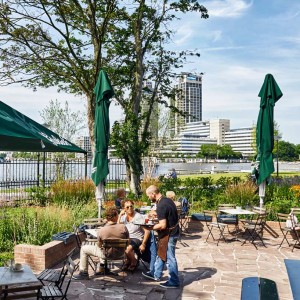 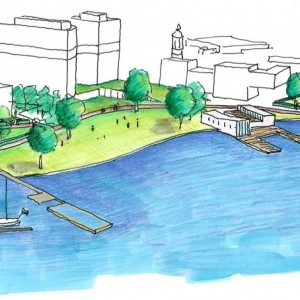 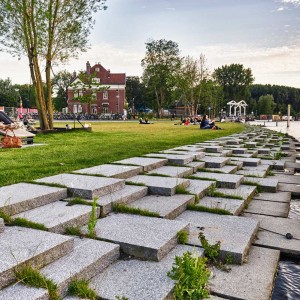 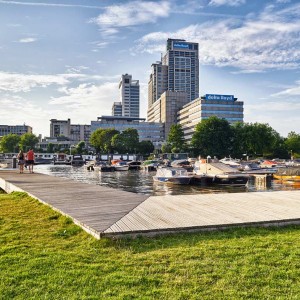 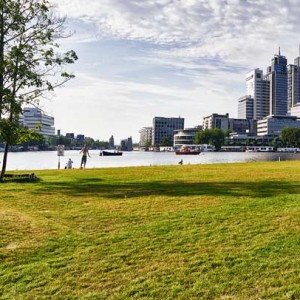 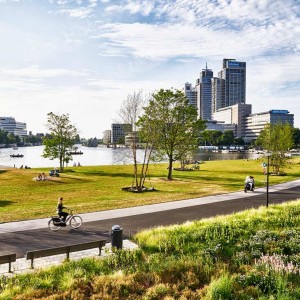 Park Somerlust is located on the historical site of the Southern Gas Factory (1885), now transformed into the new mixed-use city district, Amstelkwartier. The park is both part of the city-wide network of public spaces along the Amstel, and creates a strong identity carrier for the ambient neighborhoods. The design stacks different ambitions: integrating slow traffic networks, offering space for temporary events, programming the riverfront with sports- and hospitality industry, establishing ecological links and breeding grounds.

The walking and cycle path from the city center to the rural area around Amsterdam is the backbone of the design. The surrounding park-like environment gives substance to the transition between city and countryside. Existing historic buildings are integrated and programmed with new functions. The striking old engineer’s house is transformed into a bar, with a colourful English tea garden. It activates the park and turns it into a destination at city scale. The connection to the water is reinforced. The shores are designed as stepped platforms, generating space for fauna and flora to take over the former strict separation between water and land. Moreover, the functional relation with the river is enhanced. The existing rowing club is beautifully integrated, and a new marina is added. In addition to all these permanent functions, space for temporary activities is provided, such as the floating pool in summer. 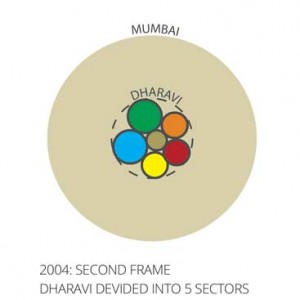 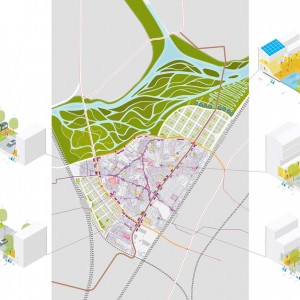 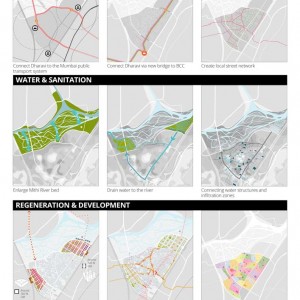 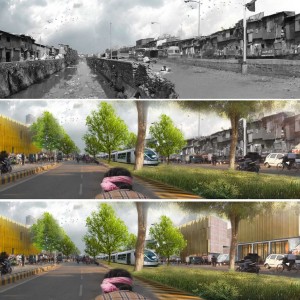 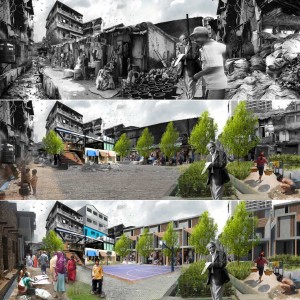 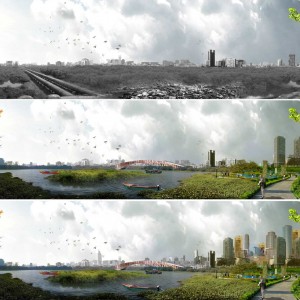 Dharavi is the largest informal settlement of Mumbai. Its central location creates a high commercial pressure, resulting in plans for the development of a glamorous urban district. Our alternative proposal builds on the paradigm shift in the common approach towards slum upgrading. Boundary defined redevelopment projects are replaced by a citywide strategies. Slums are no longer seen as isolated islands of poverty, but as disconnected informal neighbourhoods within the city. By investing in the common good and upgrading public spaces, the plan aims to reintegrate Dharavi into the city and facilitate gradual redevelopment.

This street-led approach consists of three strategies: infrastructure & mobility, water & sanitation and regeneration & development. All measurements for these strategies are substantiated in redesigned street sections, to form a network for upgrading. Water structures are connected, infiltration zones slow down rainwater runoff, sewage and clean water is provided to make Dharavi healthy and climate proof. Formalized streets connect neighbourhoods, businesses and social activities. They create the base for legislation, enabling everyone to get an address. Neighbourhood squares establish space for social and economic activities to grow into a diverse collection of urban identity carriers.
The result is a dynamic public space framework, controlling the different strategies within a participatory process, that deals as well with local entrepreneurs as international developers, connecting all scales from Mumbai Metropolitan Region to Dharavi’s different neighbourhoods.

Vogabyggð is one of the first focus areas of the Reykjavik Masterplan 2040. The masterplan aims to densify and redevelop the existing city, rather than expanding it. This strategy is deployed as a catalyst to improve the quality of life within the city. Therefore the masterplan formulates 4 key ambitions: city by the sea, green city, creative city and city for the people. The redevelopment of Vogabyggð –and old industrial harbor area- serves as a showcase to realize these ambitions and become a promising benchmark for other implementations of Reykjavik’s general masterplan.

Vogabyggð strengthens the interaction of Reykjavik with its natural frame, the sea. The district is organized around a new central square along the bay, and the seashore is developed as a diverse public realm. All cross streets are oriented towards the waterfront, turning the built fabric towards the sea. Vogabyggð re-establishes the connection between Reykjavik and it’s sublime surrounding landscape, by moving away from the existing division between urban and natural landscape. Lush green spaces are integrated in the urban fabric, and public facilities and recreational functions are located in the green. Vogabyggð releases the subdivision between residential, industrial and recreational zones, giving way for mixed-use urbanity. Careful positioning of public program activates main public places. Facilities are located in the vicinity of the ones who need them. Vogabyggð breaks with streets as infrastructural spaces, and goes through great lengths to design them as vibrant public places. Squares and parks activate new key places. Integrated networks establish connections to ambient neighborhoods and nature areas.