Mariñas Arquitectos Asociados: A little Island, al-Yazirat al –Jadra, emerging from the sea covered by vegetation about 400 metros from the outlet of “de la Miel” river (o Wâdí-l-Asal river), gave the name to Algeciras town; and from this island Tâtik ben Ziyad got into the peninsula in the 8th century leaving there a little troop to keep her beloved Umm Hakim safe. The history of the site in which the competition focuses on is very important. Different people reached the cost of the island where 12th century ago they founded the well Known “Villa Vieja, and in the 13th century the “Villa Nueva” ( o Meriní town). The “de la Miel” river became a port and the rich area of cultivation became the supplying site. Channel and irrigation ditches, fruit trees and fig trees were mixed with lush alder groves following the water. Probably right there Umm Hakim made a garden full of palms and alders, where the water sound and the horizon invited to rest. The site of the intervention with his strategic position is literally a “door” between Europe and Africa, between Spain and Morocco and follows natural limits or those urban interventions that for some reasons are not included in the town. Despite the centrality, we can appreciate a sprawling and peripheral character. In the shown pictures, as we can see, the place was totally occupied by the disorderly parking of the cars and by asphalt roads that make a deep urban fracture in Algeciras town. In the same time this area was becoming a trouble spot of social problems, both for a not regular immigration and for the presence of focuses of drug and prostitution. 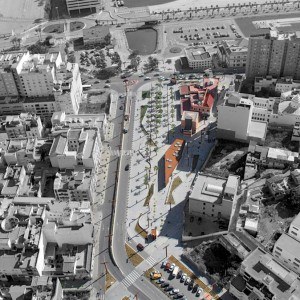 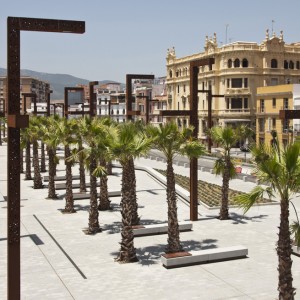 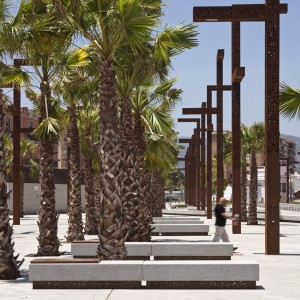 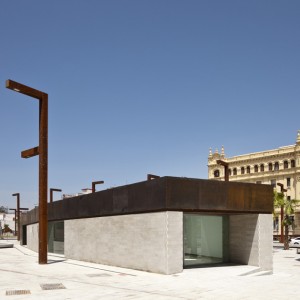 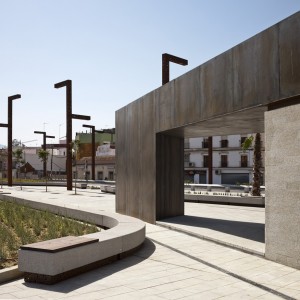 The archaeological sensibility y the historical importance of the site brought us to decide two project strategies. At fist used project as instrument to regenerate public slum area. Secondly strengthen an identification place where show the historical importance. Make a new public space as a “new door”, between two continents, recognized inside the model of the city, proposed by the general urban planning of Algeciras. Our propose wants to define a new appropriation processes of the public space, using a urban process of analysis. This process show us new prospects on the development of this context, and of urban facilities and of public service.

The intervention gives a new urban mark, a new contest where rediscovering useful sceneries and dysfunction places. We don’t forget the “Door” character, a door between Europe and Africa, visible in the urban developing space and in the spaces rest on the port terminal and the bus and train station.

The purpose is to produce an integration of the different parts and the visual back river, converting a central impermeable place (parking, building-plug) into a place with transverse traffic and developing the visual relation up to the port area and the existing urban borders.

Recovering of public places for a public utilization, trough the recovery of places currently occupied by parking of privates vehicles and regulating a program of activities compatibles with a new form of the public use. Finally, the incorporation of the flux of general activities generating by the services provided by the project.

The intervention in the site project is in a perfect relationship with the road network and with the important cross points of transportation already present or planned by the urban project and close to the site. We propose a garden-place that includes a building complex sets next to the buildings already present (interpretation building And touristic information), creating a perforated limit to protect a space-garden covered and uncovered by palms. We suggest a centre of interpretation of the ‘de la miel’ river of about 300 m2 as the main and unique building actually construct of the propose. Finally the public space, planned as a granite platform for the high durability, consists of wide areas to rest and a zones for recreational and sports activities as walking, skating, playing petanca o kite and also for musical and theatrical exhibitions. The whole street furniture has been planned and defined exclusively for this specific type of intervention and aims to keep and show the characteristic port nature of this zone and also the typical culture melting pot.

The intervention surface of about 19500 m2 and 300 m2 built-up. A budget of 4.000.000 euro for the new urbanization, including construction asphalt roads planning, and 810.000 euro for the edification proposed.

All projects by Mariñas Arquitectos Asociados on Landezine 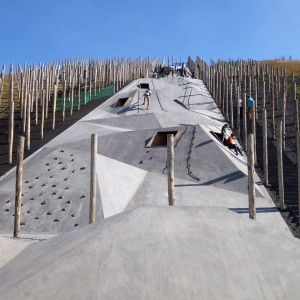 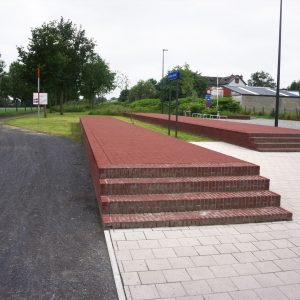 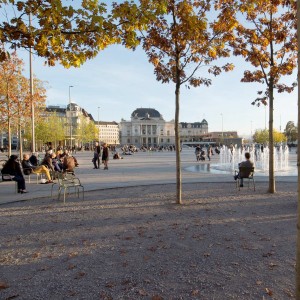