DTAH: The Simcoe WaveDeck, one of four uniquely Canadian wavedecks planned for the area, is as artistic as it is functional. Located just west of Simcoe Street at the water’s edge, the wooden wavedeck features an informal public amphitheatre-style space with impressive curves that soar as high as 2.6 metres above the lake. Inspired by the Canadian cottage experience and the shorelines of Ontario’s great lakes, the wavedeck is meant to give urban dwellers a feel for life at the lake. Providing access to Lake Ontario is a key priority for Waterfront Toronto. Built in less than eight months, the Simcoe WaveDeck joins the Spadina WaveDeck which opened last year in creating more public space along one of the most heavily used parts of the Toronto shoreline. Construction of the third wavedeck at Rees Street is well underway and will open in August. 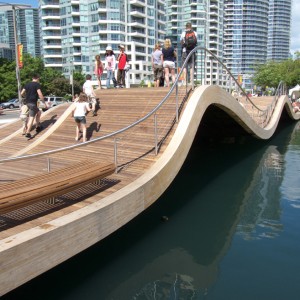 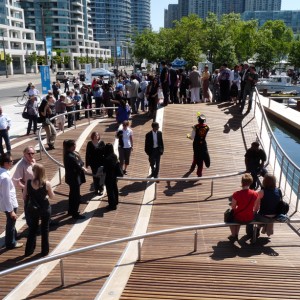 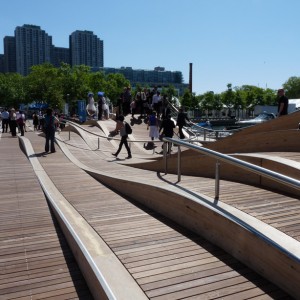 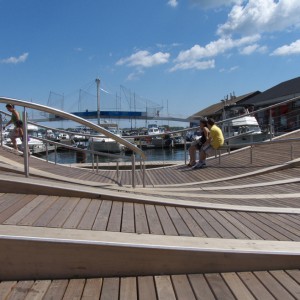 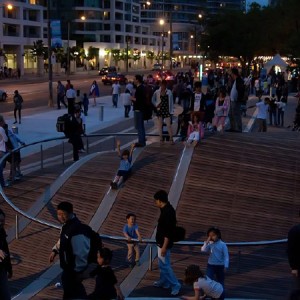 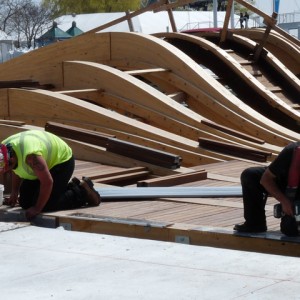 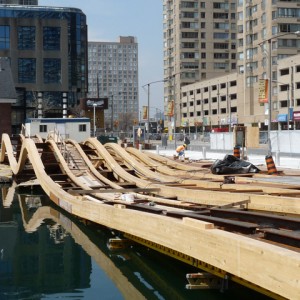 In addition to the installation of the wavedeck at Simcoe Street, construction activities included dockwall repairs, in-water fisheries habitat construction and landscape improvements. The project is part of the first phase of implementation of a strategic masterplan for the Toronto Central Waterfront prepared by West 8 + DTAH. Some further information to understand Spadina WaveDeck in context:

The Toronto Central Waterfront, a 3.5km length of Lake Ontario in direct proximity to the downtown business district, is one of Toronto’s most valuable assets. Yet despite decades of planning and patchwork development projects, there is no coherent vision for linking the pieces into a greater whole – visually or physically. In this context, the fundamental objective of the project is to address this deficiency by creating a consistent and legible image for the Central Waterfront, in both architectural and functional terms.

West 8 urban design & landscape architecture, in joint venture with DTAH, prepared a comprehensive vision for the Central Waterfront that produced a powerful design language with the strength and simplicity to overcome the existing visual noise and create a sense of interconnectedness and identity. Connectivity between the vitality of the city and the lake and a continuous, publicly accessible waterfront are the plan’s priorities. The plan expresses a vision for the Central Waterfront that brings a sustainable, ecologically productive “green foot” to the rich culture of the metropolis. It suggests a new coherence and continuity along the waterfront produced by four seemingly simple gestures that create a new “Multiple Waterfront”: the Primary Waterfront – a continuous water’s edge promenade with a series of pedestrian bridges, the Secondary Waterfront – a recalibrated Queens Quay Boulevard with a new urban promenade and WavedDeck public spaces at the heads-of-slips, the Floating Waterfront – a series of floating elements that offer new boat moorings and public spaces in relation to the lake, and the Cultures of the City – connections from Toronto’s diverse neighborhoods towards the waterfront.

West 8 + DTAH are currently implementing the first phase of the strategic masterplan. With the completion of Spadina WaveDeck and recently Simcoe Wavedeck, construction is now underway on one more WaveDeck at Rees. The first in a series of timber pedestrian bridges will begin construction in spring 2009; new streetscapes, public realm and water’s edge promenades will follow thereafter. Articulating the point of contact between the city and its waterfront and providing continuous public access are key priorities.

10.7m (length), 60m (width), Total area = 650m2 The height of the deck above the water varies according to seasonal changes in water levels. Today the deck is approximately 2.6m above the lake at the centre crest and 1.2cm above the lake at the east and west sides. The wavedeck can accommodate up to 1500 people and structurally could hold the weight of a fire truck.

The deck is made up of 3670 deck boards (3050 short deck boards and 620 long deck boards). Two types of wood were used to build the deck: Ipe wood, a durable hardwood with an extended life-cycle of 40 years; and gluelam Coastal Yellow cedar, chosen for its water-repellent character. Ipe wood was also used for the Spadina WaveDeck as well as Waterfront Toronto’s water’s edge improvement projects at York and John Quays. This helps provide a coherency and unified look for the central waterfront. The steps are large gluelam Coastal Yellow Cedar timbers which were custom milled to accurate radii in order to obtain the playful undulating curves of the deck. The wavedeck had to be structurally built to withstand the strong wave force of the lake and any ice shifting.

The deck is lit from below using LED fixtures mounted to the timber structure to illuminate the water and cast a glow from beneath the deck. The LED lights are highly-efficient with a 20-year life cycle.

The overall project cost (which includes design and construction) is expected to be about $6 million. This is significantly under the original budget estimate for the project. Total construction costs will be approximately $5.5 million. Construction began in October 2008 and was completed in less than 8 months, ahead of schedule. Pile driving and dockwall rehabilitation commenced in November and continued through to January, followed by the installation of fish habitat. The primary steel beams were installed in March. Timber beams were installed in April over a period of two weeks. The timber decking and deck furniture such as railings and benches were installed over a two month period.

The wavedeck is wheelchair accessible from all sides and includes a large barrier free zone at the east side of the deck. In addition, an accessible route between the two large swells in the deck leads users down toward the water.

The wavedeck is a uniquely Canadian structure that exists nowhere else in the world. The design of the wavedeck was inspired by the shorelines of Ontario’s great lakes and the Canadian cottage experience. The geometry of the wavedeck’s impressive curves is unprecedented. The wavedeck is an urban dock that is both a piece of art and a functional gathering space. It is a completely flexible structural space. The stairs act as an informal amphitheatre and the varying heights of the deck allow for different vantage points and ultimately different experiences with the lake. The form allows people to interpret the space in many different ways – the large open space on the east side can serve as a gathering space during events or as a staging space for buskers and other performers. The steps can be used as seating while the two large swells feature slender stainless steel railings that follow the undulations of the waves in the deck. These railings which curve inward, are designed to differentiate the artistic portions of the deck from the public areas. They also help wandering visitors negotiate the slopes. The 30 metre backless bench acts as an elegant barrier to the water while also providing seating for users of the space.

Somerville Construction, a privately owned Toronto based firm built both the Simcoe and Spadina WaveDecks and is currently finishing construction at the Rees WaveDeck. Somerville has extensive experience working on the waterfront and other unusual, one-of-a-kind, high-profile projects.

The City of Toronto is the owner of the Simcoe WaveDeck and the Parks Department will provide maintenance and operation of the public space.

The wavedeck includes the creation of new fish habitat. Riverstone shoals, tree logs and embankments were installed to provide shelter and increased feeding and forging opportunities for lake fish. Aquatic Habitat Toronto, of which Waterfront Toronto is a partner, has won a Public Sector Quality Fair award for the aquatic habitat enhancement work being done on Toronto’s waterfront. 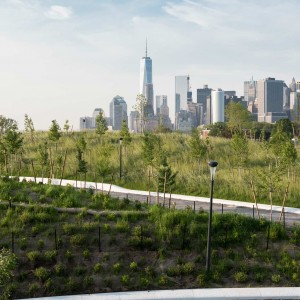 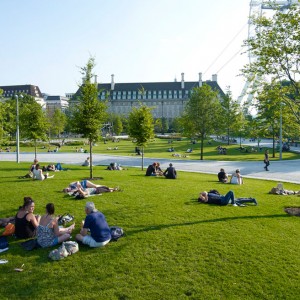 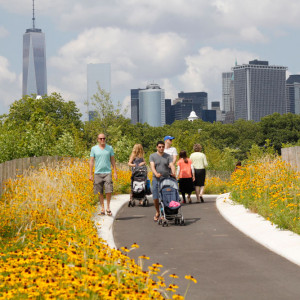 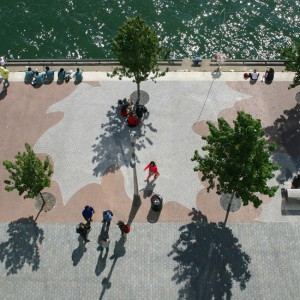 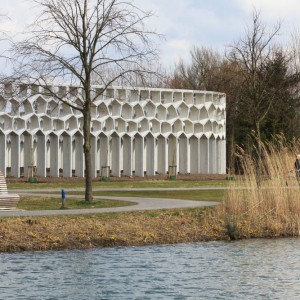 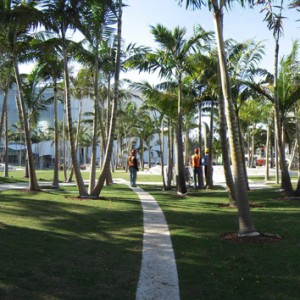 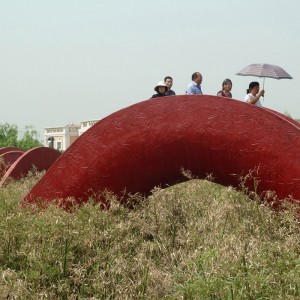 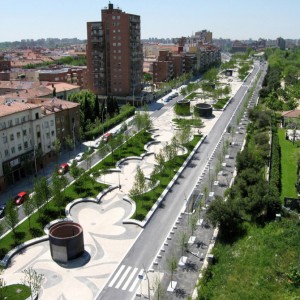 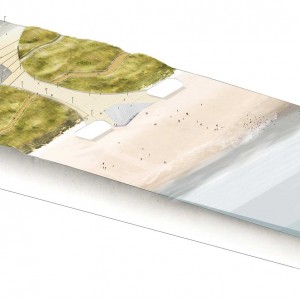 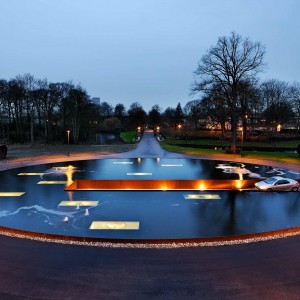 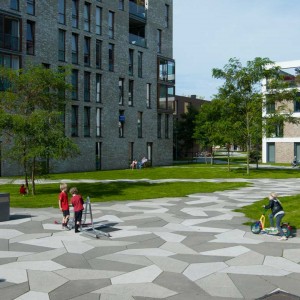 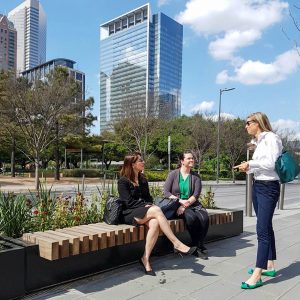